What Color Are The Croydon Youths Who Savagely Beat A Kurdish Asylum Seeker In Britain? Possibly Black Zambians!

A friend in Dallas forwarded this story with the question "Who is doing the beating?" The answer may be Zambians:

Asylum seeker, 17, is left fighting for his life after a gang of eight youths launch a ‘frenzied attack’ in a suspected 'hate crime' while he was waiting at a bus stop By Charlie Moore and Paddy Dinham For Mailonline

A teenage asylum seeker is fighting for his life after a 'frenzied attack' by a gang who set upon him at a bus stop after learning his nationality.

The 17-year-old, a Kurdish Iranian, was with two friends in Croydon, south-east London, when he was set upon by around eight youths.

They asked him where he was from, and when he told them he was an asylum seeker they chased after him and launched their attack.

Scotland Yard said the boy is in a critical condition in hospital and fighting for his life, while his two friends escaped with minor injuries.

Chief Superintendent Jeff Boothe, Croydon's borough commander, told reporters the teenager had been a victim of 'a frenzied attack by a large number of people'.

He was kicked repeatedly while on the floor, 'by all accounts with members of the public asking them (his attackers) to stop'.

They only did so when they heard sounds of police sirens approaching, Mr Boothe said.

The attack has prompted a wave of condemnation, with Tory minister Gavin Barwell, Croydon Central's MP, describing the attackers as 'scum'.

He told the Press Association: 'I think most people in Croydon will be as appalled as I am that what appears to have happened is a young man who came to this country seeking sanctuary has apparently been targeted because of his ethnic background.

'It's an appalling crime and I hope the people responsible are caught quickly and receive the full force of British justice.' [More]

I wonder if this white Tory MP knew what I know (thanks to Google) about the area where the vicious beating took place, and specifically the Goat Pub outside of which the attack took place.

You see , the Daily Mail goes on to say that

Detective Sergeant Kris Blamires said: 'At this early stage it is believed that about eight suspects approached the victim as he waited at a bus stop with two friends outside The Goat public house in the Shrublands.

'It is understood that the suspects asked the victim where he was from, and when they established that he was an asylum seeker they chased him and launched a brutal attack.

'He has sustained critical head and facial injuries as a result of this attack, which included repeated blows to the head by a large group of attackers.

'A number of people came to the aid of the victim as he lay unconscious and injured following the assault.

'The suspects are believed to have made off in the direction of the Goat Pub, Broom Road, following the attack.

'All communities stand together against hate and we would ask anyone with any information to come forward immediately.'

You see, the Goat, while occasionally a den of iniquity like the Star Wars Cantina, is less multicultural than that famous tavern, and the licence holder is named Ngoma.

The Goat, in Broom Road, Shirley, could be forced to close following 'months' of criminal and anti-social behaviour

Councillors will decide tonight whether to revoke the licence of The Goat, in Broom Road, after licence-holder Patson Ngoma "reneged on his promises to work with the police to resolve the issues at the premises".

So the youths who beat up a refugee of white appearance—Kurds look very white—are quite possibly racist black youths. Inquiring minds want to know!

Here is a screenshot of the inside of the restaurant: 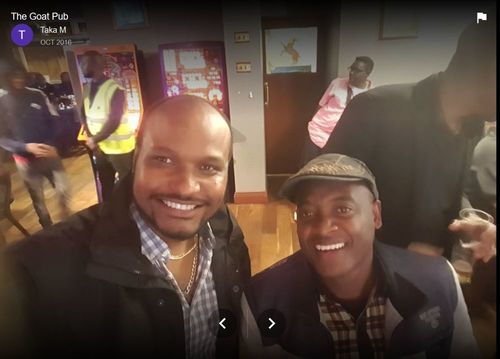 This is not to suggest that these men are guilty of anything—its to say that the pubgoers at the Goat are definitely not members of the BNP.