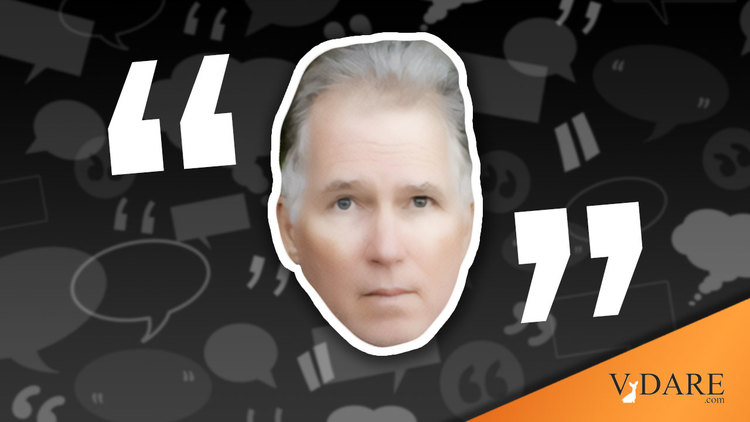 Earlier by Steve Sailer, 2013: Diversity Is Their Strength In Dagestan

Back before the Anti-Defamation League turfed out their septuagenarian leader Abraham Foxman in 2015 in favor of hard-charging MBA Jonathan Greenblatt, the ADL’s staffers seemed to have gotten a little jaded. Somebody just drew my attention to this 2013 ADL posting after the Tsarnaev Brothers blew up the Boston Marathon by an anonymous author who seems to have carefully culled through my voluminous output looking for my most killer quotes:

In the wake of the bombings during the Boston marathon, dozens of writers on the racist, anti-immigrant website VDARE published articles containing anti-immigrant and anti-Muslim rhetoric. The site’s contributors used the tragedy to decry multiculturalism and diversity, to criticize the U.S. asylum/refugee programs in the United States and to specifically target Muslim immigration.

On April 22, Steve Sailer, a longtime VDARE contributor known for making racist statements, compared the Russian region of Dagestan to the United States in order to criticize multiculturalism, claiming, “Seriously, Dagestan should stand as an object lesson to the DC-NY-Cambridge conventional wisdom about the benefits of multiculturalism. Everybody in Dagestan knows that diversity is their weakness. The lack of solidarity keeps the place futile and backward.” The day before, on April 21, Sailer targeted immigration reform, stating, “The entire marketing campaign has been framed around pushing the mindset that it’s racist for Americans to try to choose who gets in. Instead of choosing, we should just take what we are given by the rest of the world and be grateful for their vibrant diversity. If you live in the Boston area and your windows have been rattling, well, that’s just the vibrancy manifesting itself.”

In reaction to the Boston bombings, VDARE writers also attacked the refugee/asylum programs in the United States. … Also on April 19, Sailer voiced his opposition to refugees/asylum seekers, claiming, “It’s funny how the refugee system works. It’s almost as if foreigners who are really good at getting their neighbors to hate them seem to wind up as refugees in America more than foreigners who are good at getting along with their neighbors. I’d say that that’s ironic, except that irony is racist.” [Links added, the original ADL posting contained NO LINKS.]

I could imagine that if you are employed at a low wage by the ADL or SPLC to persecute free thinkers you might eventually start asking yourself, “Are we the baddies?” and get back at your horrible bosses by curating the Steve Sailer Greatest Hits list at their expense.

Or do people who look to the ADL for moral guidance automatically find these zingers abhorrent?

Anyway, I’ve often thought about compiling a book of my best quotes—from a phrase to a paragraph—but perhaps my judgment is lacking?

If you feel like it, please suggest your favorite quotes of mine in the comments.