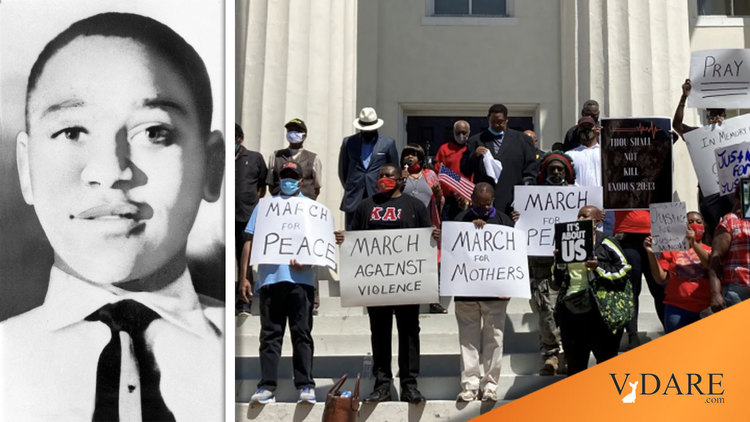 So how is life in one of America’s blackest cities, where the nearly 90% black population has created such a thriving community that no movie theater has been opened in more than 20 years…

Ladies and gentlemen, welcome to Jackson, Mississippi, where the cousin of Emmett Till is trotted out to tell the nearly all-black capital city of the state to stop killing each other.

‘I demand you to stop being quiet’: Families of Jackson gun violence victims call for action, Mississippi Clarion Ledger, April 25, 2021

Almost a month has passed since Justin McNeal was fatally shot on Interstate 220 while driving home from Ridgeland after a job interview to be a certified nursing assistant.

McNeal was only 24 when he died March 28. He was the type of person to give you the shirt off his back, girlfriend Mercedez Ramsey said Sunday.

Now, his friends and family wear shirts emblazoned with his name. His smile. His memory.

“Justice for Justin,” his father, Jermaine McNeal’s, T-shirt reads. “Until we meet again,” runs across the back of Ramsey’s.

They were among those gathered Sunday afternoon in front of the Mississippi State Capitol stairs for a “Stop the Violence” march organized by Ward 3 Councilman Kenneth Stokes to address surging gun violence in Jackson.

Dozens of residents marched from the Capitol to City Hall, several carrying posters bearing the names and faces of victims.

Stokes looked across the growing crowd in front of City Hall steps and said, “We declare a war on violence.”

The march came on the heels of Jackson’s 48th homicide committed this year. Officials credit the pandemic, ease of access to weapons and the city’s police officer shortage for the rise in violence.

“We shouldn’t be at each other’s throats no matter what’s going on in society,” Priscilla Sterling, Jackson resident and cousin of Emmett Till, said. “Our officials need to be involved in the increase of everything that is going on, from the gun violence to the water crisis, especially the racial inequalities.”

‘Life in Jackson, Mississippi, has been devalued’

These types of crimes are nearly impossible to predict and prevent, Davis told the crowd. While deputies saturate the streets, he said, the department is working to recruit more people and increase community communication.

Over the past 30 days, Germaine McNeal hasn’t come any closer to finding out who killed his son. The family posted a $11,500 reward for information that would lead to an arrest in their son’s death. No one has come forward.

But the McNeal family will not rest until they get their answers.

“He was one of those good people we still needed on this Earth,” Ramsey said.

If Emmett Till’s cousin can’t convince black people to stop shooting each other in nearly 90% black Jackson, Mississippi, is there any hope in proving black lives actually matter to black people?

My family followed her move 25 years later due to the increasing crime. Our cars and house were constantly burglarized. It was a different day than when white residents were in the community. Crack, cocaine, heroin has been dumped for trade in many middle-class Black neighborhoods, affecting the dynamics.

The name Delta Drive referred to traveling to the flatland of Mississippi up Highway 49 to the northwest part of the state where cotton, corn and watermelon are common. The land is fertile and perfect for agriculture.

When I travel to a new city, if I want to find chicken wings, I find Martin Luther King Street. I also know that there is a good possibility there will be crime such as increased homicide, robberies and the illegal sale of illicit drugs. Police do not protect like they do in non-Black areas.

An 18-year-old Black female, a new graduate from Murrah High School, was shot three times two hours after her cap and gown ceremony on Medgar Evers Boulevard Tuesday. The pretty young lady who was wearing silver sparkling high heels like Cinderella did not survive.

“Myrlie ought to demand her husband’s name taken down. There has been nothing but bloodshed since,” said my aging mother about her previous neighbor friend. “I can’t believe they shot her…”

The reality is Medgar Evers Boulevard is a dangerous area and does not represent Medgar Wiley Evers, the late civil rights icon.

The road should be known as the New Delta Drive where we have hope of a beginning that an 18-year-old high school female graduate is not murdered.

You can rename every street in Jackson, Mississippi for a civil rights icon or hero, but the civilization white people built and then abandoned to allow a black majority to take total control of the city will inevitably descend into the type of civilization your average black individual can maintain.

And that average is not on par with what your average white individual can maintain, regardless of how many streets named in honor civil rights icons there are.