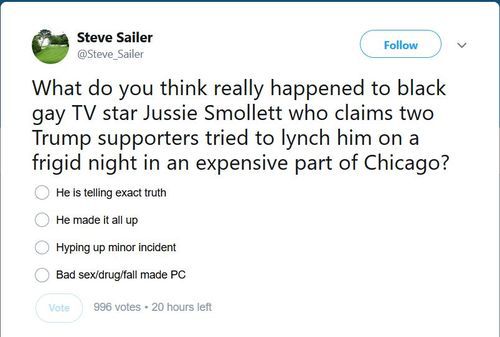 Updates On Smollett "Hate Crime": What Do YOU Think Happened?

What do you think really happened to black gay TV star Jussie Smollett who claims two Trump supporters tried to lynch him on a frigid night in an expensive part of Chicago?

“Police detectives have located surveillance cameras that show potential people of interest in the alleged assault and battery that was reported in the 300 block of E. North Water Street,“ Chicago Police told Page Six on Wednesday. “While the video footage does not depict an assault, the individuals pictured are seen in the vicinity of the alleged criminal incident during the alleged time of occurence.“ …

“Two unknown offenders approached him and gained his attention by yelling out racial and homophobic slurs towards him,” according to police.

They then “began to batter [him] with their hands about the face and poured an unknown chemical substance on the victim” while “one of the offenders wrapped a rope around” his neck before fleeing the scene, cops said.

Like I said last night, this one sounds so absurd that maybe it will turn out to be true, and we’ll hear about it endlessly for the next 64 years, like we hear about Emmett Till every week these days.

Cops: No video of attack on ‘Empire’ actor Jussie Smollett

CHICAGO — Detectives have reviewed surveillance footage of “Empire” actor Jussie Smollett walking to a downtown Chicago apartment after an early morning visit to a Subway restaurant, but none of it showed an attack on the actor, a police official said Wednesday.

Investigators “for the most part” can confirm the route Smollett took early Tuesday when he says he was attacked by two masked men along a street in the Streeterville neighborhood, police spokesman Anthony Guglielmi said. However, there are gaps and none of the footage police have reviewed shows an attack, he said, noting that the review is ongoing.

Smollett, who is black and gay and who plays the gay character Jamal Lyon on the hit Fox television show, said the men beat him, subjected him to racist and homophobic insults, threw an “unknown chemical substance” on him and put a thin rope around his neck before fleeing.

Guglielmi said detectives who are investigating the allegations as a possible hate crime have looked at hundreds of hours of surveillance video from businesses and hotels in the heavily monitored area. But he said they still need to collect and view more. He said they are expanding the search to include footage from public buses and buildings beyond the scene’s immediate vicinity in the hopes of spotting the men who match Smollett’s description of the suspects.

“We haven’t seen anybody, at this point, matching the description he gave, nobody looks menacing and we didn’t find a container anywhere,” Guglielmi said, referring to a container for the liquid that the actor said was thrown at him.

So, what do you think really happened? (These choices are close to but not exactly the same as in my Twitter poll above.)

A. It really happened just the way Smollett said

B. Smollett made it all up

D. Smollett repurposed a real event (e.g., an unfortunate drug or gay sexual encounter that left him disheveled) as PC excuse for why he looked messed up