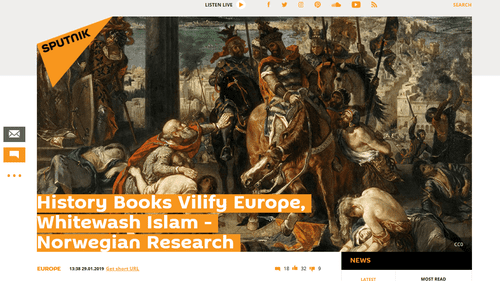 Today's American education system is biased against Western Civilization. A Norwegian researcher doing his master's thesis  has studied recent Norwegian textbooks and found the same thing in his country. It's probably true throughout the Western world.

In Norwegian textbooks, Europeans are systematically portrayed as abusers, imperialists, and exploiters. By contrast, non-whites are ascribed the role of victims, signalling an anti-Western bias, a new study has claimed.

"Something to do with European supremacy", a new study by Bergen University student Kristoffer Tyssøy Høisæther, has uncovered double standards in the way history is being presented in Norwegian textbooks used today in elementary and high schools.

"The most remarkable finding in my work is how Europeans are consistently portrayed as 'abusers', as opposed to other cultures and peoples, who continually hold a sacrificial role", Høisæther wrote in an article in the news outlet Resett.

To quantify this finding, the author listed 25 instances of massacres, mass killings and genocides depicted in history books, all of which were carried out by Europeans. By contrast, Muslims and Jews are exclusively given the role of victim. "The willingness to place Europeans solely in the role of the abusers is highly reprehensible, and this is undoubtedly instrumental in creating a very distorted picture of history", Høisæther wrote.

Note that the study criticizes the unbalanced way in which historical Europeans are portrayed in contrast with non-Europeans, calling it "highly reprehensible".

If kids are brainwashed to think of their civilization as evil, why would they ever defend it?

In one textbook, "cruelty and greed" were called "typical European characteristics".

Yes, as if non-Europeans can't be cruel and greedy.

Furthermore, Western prosperity was attributed to "gross exploitation of other peoples". While European immigration to America "wiped out millions of Indians", non-European conquests are portrayed in a much more peaceful way, such as "the Arabs spread out over a vast area".

So the Arab Muslim conquests are presented as "spreading out"?

Similarly, trade in the Indian Ocean, which included millions of slaves, is portrayed as a "flourishing enterprise and a multifaceted contact across cultures, religions and languages". Such a description for the Atlantic trade carried out by Europeans is hardly imaginable.

According to Høisæther, in several comparisons between the West and the Islamic world, the former appears clearly inferior. The Islamic world is claimed to be "distinctly democratic", whereas the Europeans excelled "in strength and rage". In another instance, the Renaissance and the Enlightenment were allegedly founded on knowledge preserved by Islam.

We hear that a lot here also.

While Christianity is portrayed as a brutal and merciless religion, with compulsory conversion and mass executions, the Islamic world, especially the Ottoman Empire, which led expansionist wars for hundreds of years, is praised for its religious tolerance. No attention is devoted to the persecution of non-Muslims in the Middle Ages. Spain under its 700-year Muslim rule is thus portrayed as a peaceful place with various confessions happily co-existing.

This is probably typical today in all Western education systems.

"In almost all textbooks, we are served a bloody narrative about fanatical crusades, when men, women, children and old people were massacred with delight. The conquest of Jerusalem during the First Crusade is given a unique place in most textbooks as an event of unmatched brutality. No other event, be it the Arab, the Turkish or even the Mongol conquests are classified as mass murder, while the reader is also spared of gory details", Høisæther stressed.

In Mongolia, Genghis Khan is considered a hero. Just because White Western People constantly apologize for their ancestors doesn't mean that every culture does.

According to him, unilateral depictions are common, but sometimes unsustainable claims are made, pushing the narrative to a level that no historian would take seriously. For instance, the Turkish conquest of Constantinople in 1453 was not followed by killing, looting and pillaging, but the Christians gained privileges from the Sultan, one textbook claimed.

Another such instance is the role of women in European versus Muslim communities. The Bible is presented as a tool for women's oppression, resulting in women becoming subjugated and viewed as obedient marriage material. The Quran, by contrast, is claimed to have had a liberating effect on women, serving for their stronger position in the Muslim world.

For his study, Høisæther has analysed six textbooks for high school and three books for elementary school, all produced after the 2006 Norwegian education reform. This constitutes the vast majority of school history textbooks for regular education produced in the post-reform period and is therefore representative of contemporary school textbooks as a whole, he noted.

According to Høisæther, the textbooks are often students' portal to topics where prior knowledge is little or non-existent and are therefore very important in forming a person's worldview. By his own admission, he hopes to instigate a discussion and critical analysis of Norwegian teaching materials.

Nevertheless, he admitted that has little confidence in this happening.

At least Høisæther is doing his part.  And this research was for his master's thesis.  Just think what he might be able to accomplish in the future.