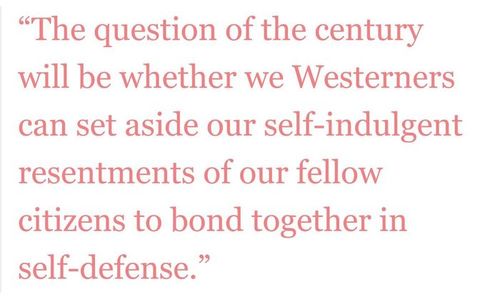 In the spirit of Aristotelian moderation, allow me to suggest that an emerging danger of the 21st century is that the non-Western world could get overly right-wing. Ironically, a major cause would be that white Western liberals are focusing all of their firepower—using as cat’s paws flagrantly illiberal nonwhites such as Muslim immigrants—upon the second-most progressive group on earth, white Western conservatives.

In a world where Western whites are an increasingly tiny minority, falling from roughly 19 percent of the world’s population in 1950 to perhaps 9 percent today, this divide is dangerous. The internecine status war among the people who built the modern world looks increasingly likely to embolden the rest of the human race to regress into bad old habits, such as racist hatred, religious fanaticism, and bellicose tribalism.