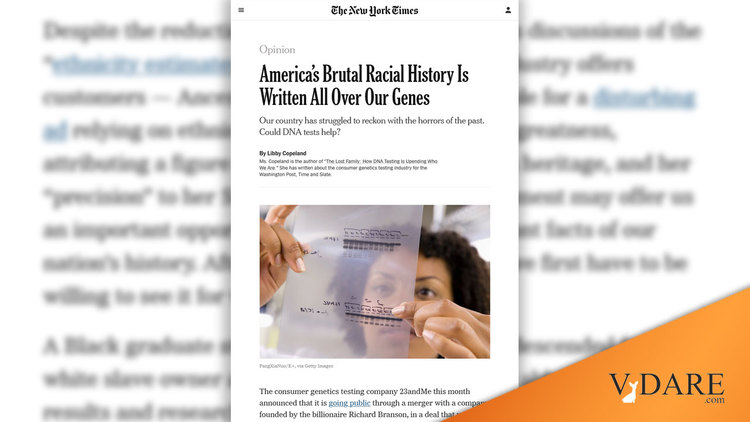 America’s Brutal Racial History Is Written All Over Our Genes
Our country has struggled to reckon with the horrors of the past. Could DNA tests help?

By Libby Copeland
Ms. Copeland is the author of “The Lost Family: How DNA Testing Is Upending Who We Are.” She has written about the consumer genetics testing industry for the Washington Post, Time and Slate.

The consumer genetics testing company 23andMe this month announced that it is going public through a merger with a company founded by the billionaire Richard Branson, in a deal that valued it at $3.5 billion. This was just the latest big deal for the industry: Last year, the Blackstone Group acquired a majority stake in Ancestry, a 23andMe competitor, for $4.7 billion.…

The debate around race consuming America right now is coinciding with a technological phenomenon — at-home genetic testing kits — revealing many of us are not who we thought we were. Some customers of the major DNA testing companies, which collectively have sold 37 million of these kits, are getting results that surprise them.

…Some people are discovering their ancestors were Black, or Jewish.

… Our country, riven by wounds old and new over centuries of racist mistreatment, hasn’t figured how to acknowledge the full horrors of the past and all the ways those horrors continue. The images from the Capitol Hill incursion drove that home…

Recent research conducted by 23andMe demonstrates how America’s brutal history is revealed through our genes. While the majority of enslaved people brought to the Americas were male, the study found enslaved women had a disproportionate impact on the gene pool of their descendants, evidence of the systematic rape and sexual exploitation of enslaved Black women. “Our genes tell a story that’s unflinching,” said Anita Foeman, a professor at West Chester University who studies people’s experiences with consumer DNA testing.

The NYT article cited shows that black slaves were treated far better in the US than in most other parts of the New World:

What’s more, in the United States, European men contributed three times more to the modern-day gene pool of people of African descent than European women did. In the British Caribbean, they contributed 25 times more.

This genetic evidence, the scientists say, may be explained by local practices. In the United States, segregation between enslaved people and the European population may have made it more likely that the child of an enslaved mother would have an enslaved father. But in other regions where enslaved men were less likely to reproduce, dangerous practices like rice farming — in which harsh conditions and muddy fields made it easier to drown, and malaria was common — may have killed many of them before they could have children.

Back to the new op-ed

A 23andMe study from 2015 revealed that close to 4 percent of the company’s customers who identified as white Americans had at least 1 percent African ancestry, consistent with an African ancestor within the last 11 generations or so. About 12 percent of whites from Southern states like South Carolina and Louisiana had 1 percent or more of African ancestry.

The Harvard scholar Henry Louis Gates Jr. has calculated that there are millions of contemporary whites who, “according to the old, notorious ‘one- drop rule’ of the Jim Crow era, would have been considered legally ‘black’” — proof not only of the absurdity of that definition of difference, he writes, but of the power of modern science to blow up false narratives about race and about American history. If modern DNA tests had existed during the heyday of mainstream eugenics in the early 20th century, Dr. Gates and others have suggested, they might have served as direct repudiation of that pseudoscience.