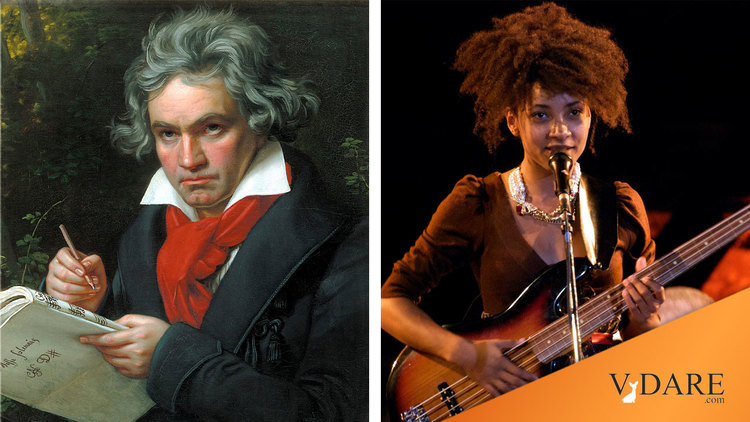 Is It Racist To Say That Beethoven Is Greater Than Esperanza Spalding?

A scholar’s address about racism and music theory was met with a vituperative, personal response by a small journal. It faced calls to cease publishing.

A periodical devoted to the study of a long-dead European music theorist is an unlikely suspect to spark an explosive battle over race and free speech.

But the tiny Journal of Schenkerian Studies, with a paid circulation of about 30 copies an issue per year, has ignited a fiery reckoning over race and the limits of academic free speech, along with whiffs of a generational struggle. The battle threatens to consume the career of Timothy Jackson, a 62-year-old music theory professor at the University of North Texas, and led to calls to dissolve the journal.

It also prompted Professor Jackson to file an unusual lawsuit charging the university with violating his First Amendment rights — while accusing his critics of defamation.

This tale began in the autumn of 2019 when Philip Ewell, a Black music theory professor at Hunter College, addressed the Society for Music Theory in Columbus, Ohio. He described music theory as dominated by white males and beset by racism. He held up the theorist Heinrich Schenker, who died in Austria in 1935, as an exemplar of that flawed world, a “virulent racist” who wrote of “primitive” and “inferior” races — views, he argued, that suffused his theories of music.

Having no musical ability, I am pig-ignorant about music theory. I’d never heard of Herr Schenker. Reading up on him, it’s clear that some idolize him. But he also sounds disagreeable, rather like Ignatius J. Reilly:

Having failed to gain recognition as a composer, conductor, and accompanist, by 1900 he shifted his focus increasingly on problems of musical editing and music theory … Schenker hoped his monograph on Beethoven’s 9th Symphony (published in 1912) would have a revelatory effect, but believed that the book’s reception would be clouded by musicians’ faulty understanding, due to poor theoretical instruction.

Schenker sounds rather like various egotistical cult leader intellectuals, such as Marx, Freud, Rand and so forth. But I certainly lack what it takes to objectively analyze the magnitude of his contribution. The great conductor Furtwangler deeply admired Schenker.

“I’ve only scratched the surface in showing out how Schenker’s racism permeates his music theories,” Professor Ewell said, accusing generations of Schenker scholars of trying to “whitewash” the theorist in an act of “colorblind racism.”

The society’s members — its professoriate is 94 percent white — responded with a standing ovation. Many younger faculty members and graduate students embraced his call to dismantle “white mythologies” and study non-European music forms. The tone was of repentance.

“We humbly acknowledge that we have much work to do to dismantle the whiteness and systemic racism that deeply shape our discipline,” the society’s executive board later stated.

At the University of North Texas, however, Professor Jackson, a white musicologist, watched a video of that speech and felt a swell of anger. His fellow scholars stood accused, some by name, of constructing a white “witness protection program” and shrugging off Schenker’s racism. That struck him as unfair and inaccurate, as some had explored Schenker’s oft-hateful views on race and ethnicity.

A tenured music theory professor, Professor Jackson was the grandson of Jewish émigrés and had lost many relatives in the Holocaust. He had a singular passion: He searched out lost works by Jewish composers hounded and killed by the Nazis.

And he devoted himself to the study of Schenker, a towering Jewish intellect credited with stripping music to its essence in search of an internal language. The Journal of Schenkerian Studies, published under the aegis of the University of North Texas, was read by a small but intense coterie of scholars.

He and other North Texas professors decided to explore Professor Ewell’s claims about connections between Schenker’s racial views and music theories.

They called for essays and published every submission. Five essays stoutly defended Professor Ewell; most of the remaining 10 essays took strong issue. …

Professor Jackson’s essay was barbed. Schenker, he wrote, was no privileged white man. Rather he was a Jew in prewar Germany

No, actually he lived and died in 1935 in Vienna, Austria, not in Germany.

, the definition of the persecuted other. The Nazis destroyed much of his work and his wife perished in a concentration camp.

Professor Jackson then took an incendiary turn. He wrote that Professor Ewell had scapegoated Schenker within “the much larger context of Black-on-Jew attacks in the United States” and that his “denunciation of Schenker and Schenkerians may be seen as part and parcel of the much broader current of Black anti-Semitism.” He wrote that such phenomena “currently manifest themselves in myriad ways, including the pattern of violence against Jews, the obnoxious lyrics of some hip-hop songs, etc.”

Noting the paucity of Black musicians in classical music, Professor Jackson wrote that “few grow up in homes where classical music is profoundly valued.”…

His remarks lit a rhetorical match. The journal appeared in late July. Within days the executive board of the Society for Music Theory stated that several essays contained “anti-Black statements and personal ad hominem attacks” and said that its failure to invite Professor Ewell to respond was designed to “replicate a culture of whiteness.”

Graduate students at the University of North Texas issued an unsigned manifesto calling for the journal to be dissolved and for the “potential removal” of faculty members who used it “to promote racism.”

University of North Texas officials in December released an investigation that accused Professor Jackson of failing to hew to best practices and of having too much power over the journal’s graduate student editor. He was barred from the magazine, and money for the Schenker Center was suspended. …

That said, race is an electric wire in American society and a traditional defense of untrammeled speech on campus competes with a newer view that speech itself can constitute violence. Professors who denounced the journal stressed that they opposed censorship but noted pointedly that cultural attitudes are shifting.

“I’m educated in the tradition that says the best response to bad speech is more speech,” said Professor Edward Klorman of McGill University. “But sometimes the traditional idea of free speech comes into conflict with safety and inclusivity.”

After all, who is more likely to tip over into amok violence than some music theorists?

… Schenker, who was born in Galicia, part of the Austro-Hungarian empire, was an ardent cultural Germanophile and given to dyspeptic diatribes. He spoke of the “filthy” French; English, and Italians as “inferior races”; and Slavs as “half animals.” Africans had a “cannibal spirit.” …

… A cellist and scholar of Russian classical music, Professor Ewell, 54, describes himself as an activist for racial, gender and social justice and a critic of whiteness in music theory. … He is part of a generation of scholars who are undertaking critical-race examinations of their fields. …

For music programs to require mastery of German, he has said, “is racist obviously.” He has criticized the requirement that music Ph.D. students study German or a limited number of “white” languages, noting that at Yale he needed a dispensation to study Russian. He wrote that the “antiracist policy solution” would be “to require languages with one new caveat: any language — including sign language and computer languages, for instance — is acceptable with the exception of Ancient Greek, Latin, Italian, French or German, which will only be allowed by petition as a dispensation.”

Last April he fired a broadside at Beethoven, writing that it would be academically irresponsible to call him more than an “above average” composer. Beethoven, he wrote, “has been propped up by whiteness and maleness for 200 years.”

“Master,” and its derivatives (masterwork, masterpiece, masterful), carries both racist (master/slave) and sexist (master/mistress) connotations. In music theory “masterwork” is generally applied to compositions by white males. But Beethoven’s Ninth Symphony is no more a masterwork than Esperanza Spalding’s 12 Little Spells. To state that Beethoven was any more than, say, above average as a composer is to state that you know all music written on planet earth 200 years ago when Beethoven was active as a composer, which no one does.

This view reminds me of the scene in the film Napoleon Dynamite, where Napoleon and his older brother Kip are watching Uncle Rico’s home movies of himself throwing a football. Napoleon says, “This is pretty much the worst video ever made!” to which Kip replies, “Like anyone can even know that.”

Back to Prof. Ewell on Beethoven:

Esperanza Spalding is a pretty jazz bassist who, due to systemic racism, has won only four Grammy awards.

In Stoppard’s Jumpers, the philosophy professor hero argues in favor of the inequality of tones by playing trumpets from a work of Mozart’s and then the sound of a trumpet falling down a flight of stone steps.

But that, we now know, is racist.