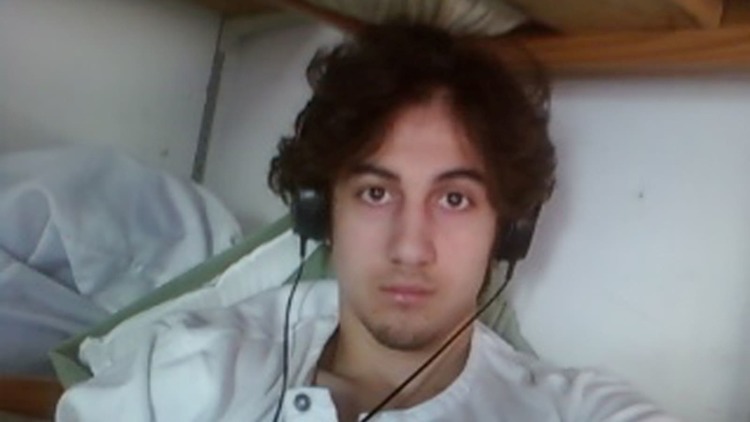 WaPo: "Dzhokhar Tsarnae​v Was ‘Black’ in Russia. Is He White in America?"

From the Washington Post, a reprint of that 2013 blog post by Eliot Borenstein that I quoted a half-week ago in my post about Masha Gessen. Borenstein is less crazed than Gessen, but then he didn’t get to be the Obama Administration’s chief of Russian-language propaganda, either, so he probably ought to work on upping

Dzhokhar Tsarnae?v was ‘black’ in Russia. Is he white in America?

How the jury perceives his race may well change his sentence.

By Eliot Borenstein January 8 at 2:47 PM

Eliot Borenstein is Professor of Russian and Slavic Studies at NYU and editor of the All the Russias blog at the Jordan Center for the Advanced Study of Russia.

What do Americans see when they look at Dzhokhar Tsarnaev? And do Russians see the same thing?

This week, the court is selecting a jury for Tsarnaev’s trial on charges stemming from the 2013 Boston Marathon bombing. As any viewer of “Law and Order”knows, Tsarnaev is to be tried by a “jury of his peers.” But, as Masha Gessen points out in a recent New Yorker post, “very few of the twelve hundred prospective jurors resemble Tsarnaev.”

This question of “resemblance” could have real-world consequences. In a recent study, Northwestern University professor Nour Kteily found that participants were significantly more likely to demand harsher penalties for the Tsarnaevs if they believed the brothers were “not white.” …

The bombers’ racial identity has been a thorny issue for some time now. …

As Peter Beinart asked in The Daily Beast, “Are the Tsarnaevs White?” Beinart does a fine job reminding us that whiteness has long been a historically constructed and contested category in America, one that cannot be reduced merely to skin tone.

The history of immigration and assimilation in the United States is the history of the evolution of whiteness. As recently as 1988, I remember a limo driver in southern New Jersey explaining to me that Princeton was so ritzy “you had to be white or Italian to live there.” The Italians, Irish and Jews eventually overcame enough stigma to be considered white, but they were not “white” from the beginning.

Who can forget that famous scene in Gone with the Wind in which Scarlett is revealed to have an Irish last name, O’Hara, and is therefore immediate sold into slavery?

By the way, from Wikipedia:

Born Vivian Mary Hartley[2] in the campus of St. Paul’s School, Darjeeling in the then Bengal Presidency of British India, she was the only child of Ernest Hartley, an English officer in the Indian Cavalry, and his wife, Gertrude Mary Frances (née Yackjee; 1888–1972),[3][4] a devout Roman Catholic, who may have been of Irish and Parsi Indian ancestry.[5]

Merle Oberon was another black-haired Anglo-Indian leading lady of the 1930s.

The color line is still decisive: Visible shades of brown or gold are an insurmountable impediment.

Beinart’s conclusion is that the obstacle to the Tsarnaevs’ whiteness is Islam, which in contemporary America has the effect of adding invisible layers of brown to otherwise pale skin. This makes sense as far as it goes, but it leaves out a crucial component for understanding the Tsarnaevs’ position on the color wheel: their racial identity before their arrival in the United States. Back in the Russian Federation, were the Tsarnaevs “white”? If they weren’t, what were they?

Bilingual speakers of Russian and English all recognize the disconnect between the terms “Caucasian” (i.e., “white”) and “Caucasian” (person from the Caucasus region of the former Soviet Union); for Russian speakers, the two terms are functionally opposite. What, then, are “people of Caucasian nationality” (as the Russian bureaucratic phrase would have it)? Can their difference be mapped onto a grid of whiteness and non-whiteness?

Part of the problem in mediating between American and Russian understandings of difference is that Americans are accustomed to seeing race as the default category for otherness. The American preoccupation with race as a primal category makes complete sense, given that the country is haunted by not one, but two racial original sins (native American genocide and the enslavement and mass murder of Africans and their descendants). The power of American racial discourse threatens to suck the life out of other analytic categories; in the public sphere, the only way we can even broach issues of social class is to conceive of them as issues of race.

Russia is another matter entirety. Social class is not a taboo topic, and the notion of “race” has played itself out quite differently. … Whiteness is invoked conversationally as a function of status and comfort, with a casualness that would cause their American interlocutors to, well, blanch. Georgia State University professor Jennifer Patico provides an example of a common Russian expression when she tells of a woman who is proud of her improved housing accommodations: “We are now living like white people.” Here whiteness points to the speaker (who is, of course, white) in an unselfconscious fashion that would be impossible in the United States: whiteness without guilt.

… This does not mean that no one in Russia is “black.” … And it is applied not according to skin color, but to hair color: In Russia, the “blacks” are the people from the Caucasus. That is, the “Caucasians,” and anyone who might look like them.

When I’m in Moscow, I expect to be stopped by police and asked for my documents on a fairly regular basis. With the protection of my magical American passport, I usually treat it as something of a sport, baiting younger, Chechen-hunting police officers who have lost the Soviet-era knack for spotting a Jew.

… Just as Soviet Jews, who were not Russian by definition, became “Russians” in America, it is only by coming to the United States that the Tsarnaevs became fully white. And in the process, reminded us once again of just how tenuous the category actually is.