Walter Willliams, whose death was announced today was a black free-market economist, was one of two people in the US who could say that, the other being Thomas Sowell. They used to joke that they weren't allowed to travel in the same plane, for the same reason that the President and Vice-President don't.

Williams has been quoted here repeatedly over the years. The notable thing about him, compared to such black public intellectuals as Ta-Nehisi Coates, Ibram X. Kendi, and Barack Obama, is that he didn't hate white people.

This is in spite of the fact that Williams, born 1936,  and raised in a Philadelphia housing project, was old enough to have experienced genuine official discrimination against blacks, rather than in favor of them, as has been the case since 1960 or thereabouts.

Here he is on the lack of oppression blacks experience in America, quoted here in a post on reparations:

Colin A. Ferguson's rampage, killing five New York commuter passengers and wounding 20 others, proves whites don't have a monopoly on racism. If civil rights organizations, black politicians and ministers are to keep whatever remaining modicum of rapidly diminishing credibility they still have, they must roundly condemn both Ferguson's racist behavior and his apologists. So far, I have not heard civil rights organizations calling a press conference to do that. You can bet the rent money, had a white person committed similar mayhem in Harlem, it would be show time for the likes of Al Sharpton, Jesse Jackson and Benjamin Chavis.

WE MUST SEE SUBWAY MASSACRE FOR WHAT IT IS: AN ACT OF RACISM

That column, sparked by a black-on-white hate crime, included some other examples:

The liberal news media couldn't hide this act of racism as they've hidden other acts of barbaric black racism, such as: In July 1988, Danny Gilmore was driving his pickup truck through a black neighborhood in Cleveland. He had a minor accident with a moped rider and was set upon and beaten by a group of roughly 40 blacks. When he collapsed on the street, one of them drove Gilmore's truck over him, fatally crushing his skull, to the cheers of the mob. In January 1991, Robert Herbert and three other blacks agreed that they would kill the first white person they saw. Mark Belmore, a white student at Northwestern University, had the bad luck. He was stabbed to death. In February 1991, Christopher Peterson was arrested for murdering seven white people with a shotgun. He explained his actions by saying "he had a deep-rooted hatred for white people."According to Department of Justice statistics, when whites commit violent crimes, blacks are their victims 2.4 percent of the time; however, blacks choose white victims over 50 percent of the time. Blacks murder whites twice as often as whites murder blacks. Black-on-white gang robberies are 52 times greater than white-on-black. Black men rape white women 30 times more than white men rape black women.

What that shows is that unlike most black intellectuals, Williams had read Jared Taylor's Paved With Good Intentions. All those crimes and facts are in Taylor's book.

Then there's this, showing Williams's forgiving nature, and sense of humor. It used to be on his GMU website as text, and now on his own site, as printable PDF.

Whereas, Europeans kept my forebears in bondage some three centuries toiling without pay,

Whereas, Europeans ignored the human rights pledges of the Declaration of Independence and the United States Constitution,

Whereas, the Emancipation Proclamation, the Thirteenth and Fourteenth Amendments meant little more than empty words,

Therefore, Americans of European ancestry are guilty of great crimes against my ancestors and their progeny.

But, in the recognition Europeans themselves have been victims of various and sundry human rights violations to wit: the Norman Conquest, the Irish Potato Famine, Decline of the Hapsburg Dynasty, Napoleonic and Czarist adventurism, and gratuitous insults and speculations about the intelligence of Europeans of Polish descent,

I, Walter E. Williams, do declare full and general amnesty and pardon to all persons of European ancestry, for both their own grievances, and those of their forebears, against my people.

Therefore, from this day forward Americans of European ancestry can stand straight and proud knowing they are without guilt and thus obliged not to act like damn fools in their relationships with Americans of African ancestry.

It also shows, by the way, that Williams had a very healthy ego.

Here's the certificate, in memory of him: 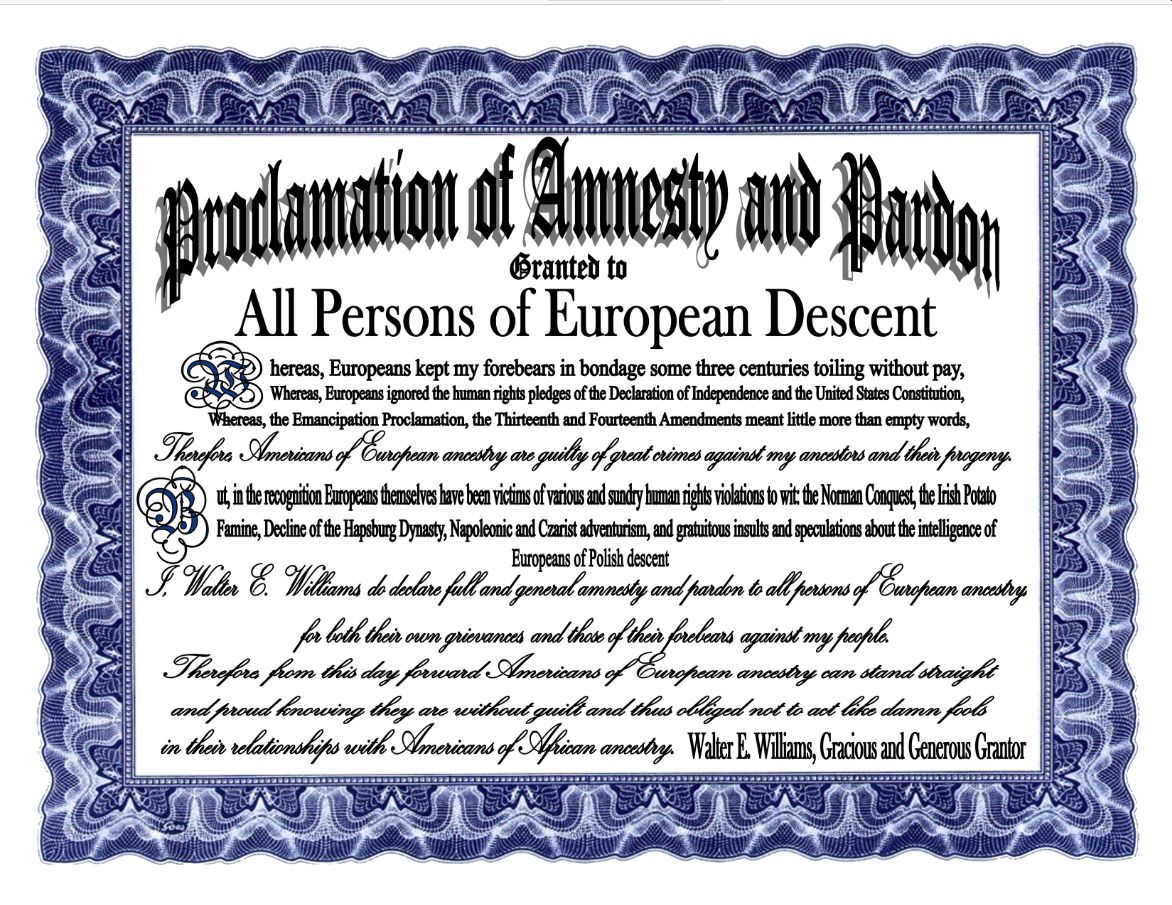