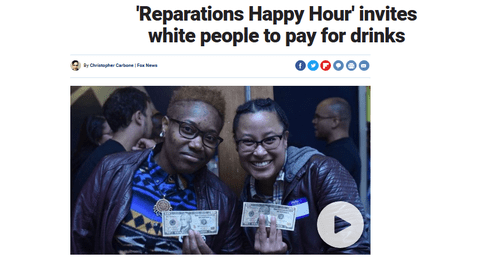 Have One On Me At Reparations Happy Hour

Just when you thought the idiocy of the left had reached its apogee, it hits the booster rockets and climbs to new heights. This time, it was a “Reparations Happy Hour” at a bar in Portland, Ore.

According to Fox News, “on Monday night, a bar in Portland, Oregon hosted people of color and gave them $10 as they arrived—a symbolic gift funded primarily by white people who were asked not to attend the ‘Reparations Happy Hour.’”

A local activist group, Brown Hope, wanted the event to be a space for people of color in a mostly white city to meet, organize, discuss public policy and potentially plan various actions….

The economist Robert Browne once estimated a fair value for reparations of $1.4 trillion to $4.7 trillion and wrote that reparations should “restore the black community to the economic position it would have had if it had not been subjected to slavery and discrimination.”

Legal Insurrection has some amusing tweets and commentary.

I can’t imagine why anyone in Oregon would owe any black person anything given that Oregon was not a slave state and did not enter the Union until 1859. Now, of course, like many people who didn’t cotton to slavery, Oregonians also didn’t cotton to blacks, didn’t want them there and forced them to leave, with repeated beatings for the recalcitrant. The law strictly regulated slave owners who brought their chattel to Oregon.

I suppose one might argue that Oregon’s history of discrimination against blacks might justify reparations, but it couldn’t have been that bad given that blacks weren’t allowed there. Slavery can’t justify them, so let’s move on to the quote from Browne, which is self-evidently ridiculous.

I supposed we’d get blamed for that, too, but anyway, if you want to know what their “economic position” is, after slavery, Jim Crow and the rest, consider this from Walter Williams:

Back to the bar in Oregonian. What kind of idiot gives away $10 to a perfect stranger to pay for a past injustice for which he it not responsible? A leftist idiot that’s what kind.