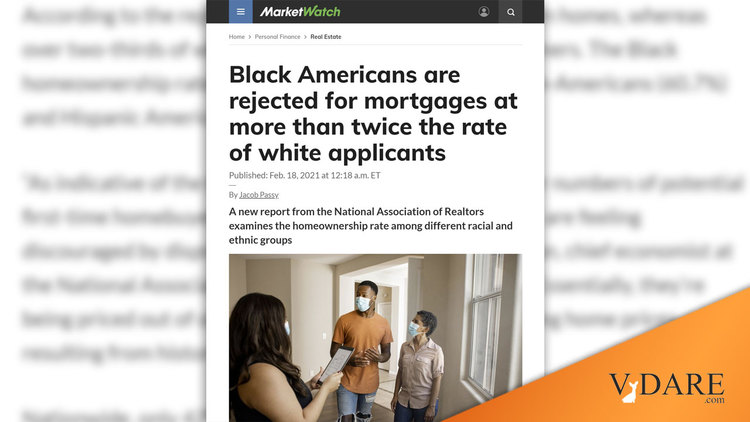 Here’s MarketWatch’s Jacob Passy recycling the claim that  Black Americans are rejected for mortgages at more than twice the rate of white applicants,  February 18, 2021. This canard was comprehensively refuted—judging by his photograph—about the time Passy was born.

In the conditions of 2021, baldly stating:

is an incendiary insinuation of racial prejudice.

In the early 1990s, Clinton Administration apparatchiks were working on the same line. They were seriously inconvenienced when Peter Brimelow published The Hidden Clue Forbes January 4, 1993:

…the fact that white and minority default rates finished up equal meant mortgage lenders knew what they were doing.

The market, in short, worked. The mortgage lenders somehow weeded out the extra credit risks among minorities, down to the, point where white and minority defaults were at an equal, apparently acceptable, rate.

The leader of the Clinton effort, Alicia Munnell, had the grace when challenged to agree:

“…discrimination against blacks should show up in lower, not equal, default rates—discrimination would mean that good black applicants are being unfairly rejected. “You need that as a confirming piece of evidence. And we don’t have it.”

Peter Brimelow subsequently amplified his discussion of the controversy  in Racism at Work.

Passy, of course, was just recycling a new report from the National Association of Realtors, lobbying for more subsidies for the housing industry in the manner which produced the Minority Mortgage Meltdown disaster in 2008-9.

But this is not 1993. A minute or two of Googling would have uncovered references to the Brimelow/Forbes article, which generated quite a lot of discussion in academia.

However this, it must be admitted,  would not be a good career move at MarketWatch. Beneath all the articles on financing retirement and divorces is fanatical Leftist control as I noted in MARKETWATCH Exults Half U.S. Births To Immigrant Mothers.

So whether from laziness or cowardice Jacob Passy has given support to a falsehood inevitably liable to stir up black resentment.