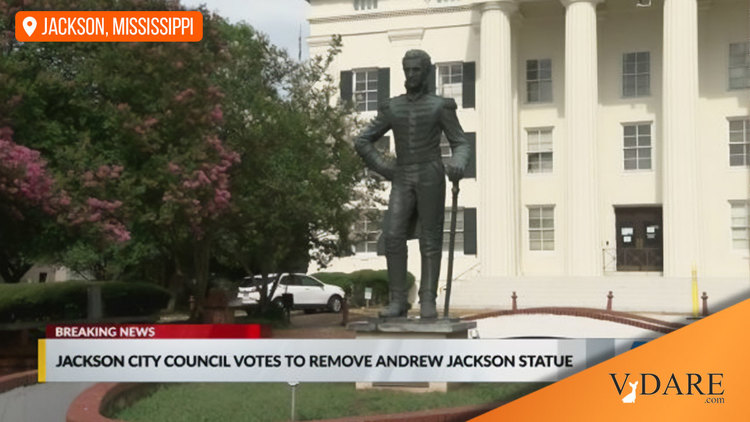 From 64% White In 1964 To Roughly 15% White In 2021: Jackson, MS Infrastructure Collapses After Decades Of Total Black Political Domination

The Great Replacement came to Jackson, the capital city of Mississippi. A little more than 50 years ago, Jackson was majority white. The civilization these white people was for a far different demographic than the racial group that inherited the city once white flight created a black majority.

Sustaining the infrastructure they were bequeathed via white flight (curiously, wherever white people fled to in metro Jackson, they created thriving civilizations out of the wilderness), the now nearly 90% black city of Jackson watches as the civilization regresses to the African mean.

Nearly one month after a winter storm froze pipes and water mains, more than 70 percent of the city’s water customers remained under a notice to boil water.

Once again, Lavern Avant was spending her day scouring Mississippi’s capital city, hoping to get her hands on a basic necessity that she and many of her neighbors had gone without for weeks.

She made her newly familiar rounds, driving in and out of parking lots, picking up cases of bottled water for herself, her husband and her neighbors. This had become her new normal since mid-February, when a strong winter storm blanketed a wide swath of the state in ice and nearly collapsed the notoriously rickety municipal water system.

It was wearing her down, she said, and was “more than a mental challenge.”

The city’s water system, parts of which are more than 100 years old, was no match for the storm, the same weather event that crushed Texas’ power grid and water systems, leaving millions of Texans without heat or drinkable water. Across Jackson, the freezing temperatures burst pipes and water mains and left a trail of misery that has stretched on for nearly a month.

More than 70 percent of the city’s water customers remained this week under a notice to boil water, including the senior living complex where Ms. Avant, 62, and her husband have an apartment. On Wednesday, she drove to five makeshift water distribution centers to stock up.

The crisis, while this time protracted, is not new in Jackson, a city of about 160,000 where a majority of residents, including Ms. Avant, are Black. In Jackson, boil-water notices are common and an enduring municipal drama has played out for decades, as white flight, an eroding tax base and poor management have left the remaining residents with old and broken pipes, but without the public funding to fix them.

Parts of Jackson’s water infrastructure are relics of the early part of the last century. A few years ago, a study found elevated levels of lead in the water, prompting comparisons to the water crisis in Flint, Mich. More recently, Jackson was plagued by a faulty billing system that failed to charge some customers and accidentally sent others statements totaling thousands of dollars.

Mayor Chokwe Lumumba, a Democrat and African-American, has estimated that modernizing the city’s water infrastructure could cost $2 billion. Last week, he asked Gov. Tate Reeves, a Republican who is white, for $47 million to help repair the city’s damaged water system.

In an interview this week, Mr. Lumumba said he hoped the current crisis would finally push both state and city officials in the direction of a long-term solution.

“There’s a saying that you should allow no crisis to go to waste,” he said. “It’s crises like these that really allow us to take stock of conditions of where we are as a city, where we are as a state and hopefully it allows us to build the resolve to address it.”

The city has had a dwindling tax base for decades, after the integration of schools and other public spaces in Jackson triggered a dramatic flight of white residents. In many cases, they took their wealth and tax dollars with them. In 1960, the city was about 64 percent white and 36 percent Black. Today it is about 16 percent white and 82 percent Black.

This week, the water barely trickled from the faucets in Carolyn Willis’s apartment. Ms. Willis, a retired nursing home cook who is Black, said that in a majority-white city, the kind of water crisis she and her neighbors continued to face “wouldn’t be happening.”

“I don’t think our water would be like it is,” Ms. Willis, 69, said. “I don’t feel like we would have to pick up the phone and call these people about the water.”

Jackson’s crisis shares some similarities with Detroit, where deindustrialization and white flight emptied out the city, leaving a smaller population to support vast infrastructure systems.

“Jackson’s infrastructure was built at a time when the population was much higher, and white flight has led to divestment,” Mr. Lumumba said. “It has left fewer people to maintain what was built for more people.”

White flight creates a black majority, where every elected official and the various governmental bureaucracies are staffed almost exclusively by black employees. Quickly, the individual black citizens collectively making up the majority of the city (be it Detroit, Gary, Newark, Flint, Memphis, Birmingham, or Jackson) fail to maintain the civilization they inherited via white flight, completely invalidating the Blood Libel that “blacks built America.”

They can’t even maintain a fully intact city, like Jackson, they are handed to them basically gift-wrapped with an invisible card attached—“Prove the so-called racists wrong by finally maintaining a city we give you via white flight. Pretty please.”