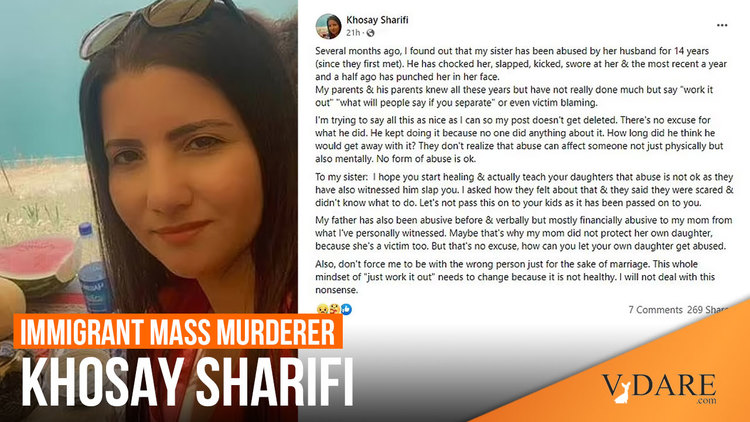 A Muslim woman in Massachusetts named Khosay Sharifi (a refugee from Kabul, Afghanistan) committed a triple murder of three male Muslim family members, because, according to her, they were abusing her sister, and threatening her with forced marriage.

Woman, 31, who gunned down her father, brother-in-law and his father in murder-suicide posted chilling message after slayings claiming her twin sister had been abused during her marriage - and relatives had all turned a blind eye

Here’s the full Facebook message, with an archive link in case of deletion:

Several months ago, I found out that my sister has been abused by her husband for 14 years (since they first met). He has chocked her, slapped, kicked, swore at her & the most recent a year and a half ago has punched her in her face.
My parents & his parents knew all these years but have not really done much but say ”work it out” ”what will people say if you separate” or even victim blaming.

I’m trying to say all this as nice as I can so my post doesn’t get deleted. There’s no excuse for what he did. He kept doing it because no one did anything about it. How long did he think he would get away with it? They don’t realize that abuse can affect someone not just physically but also mentally. No form of abuse is ok.

To my sister: I hope you start healing & actually teach your daughters that abuse is not ok as they have also witnessed him slap you. I asked how they felt about that & they said they were scared & didn’t know what to do. Let’s not pass this on to your kids as it has been passed on to you.

My father has also been abusive before & verbally but mostly financially abusive to my mom from what I’ve personally witnessed. Maybe that’s why my mom did not protect her own daughter, because she’s a victim too. But that’s no excuse, how can you let your own daughter get abused.

Also, don’t force me to be with the wrong person just for the sake of marriage. This whole mindset of ”just work it out” needs to change because it is not healthy. I will not deal with this nonsense.

Multiple sources (the Guardian, the Mirror, and Heavy.com, and her Facebook page) describe her as an Afghan refugee, born in Kabul, which makes this an “Immigrant Mass Murder.”

Usually, when there’s one of these killings over the difference between American and Afghan concepts of honor, it’s the woman who’s the victim.

But of course, this murder never had to happen in America, if America didn’t allow immigration from Afghanistan.