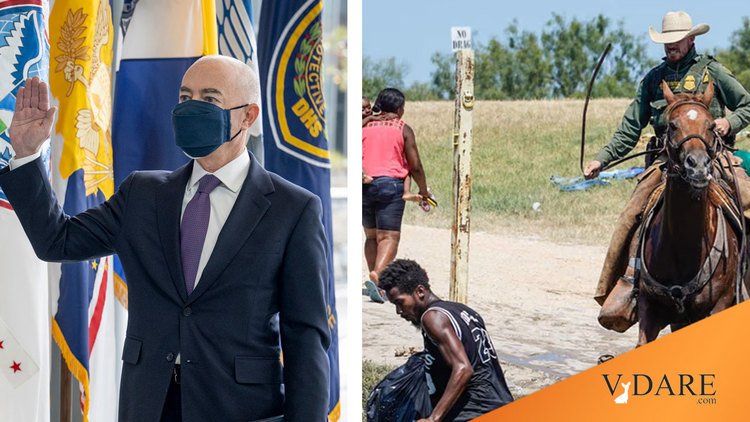 People who don’t know Homeland Security Secretary Alejandro Mayorkas’ past might be surprised at the latest from Fox News’s Bill Melugin. But those who do know his past won’t be surprised. The brains behind Deferred Action for Child Arrivals finagled visas for rich foreigners in 2015 but never was punished [Alejandro Mayorkas: A Portrait of the Intended Nominee for DHS Secretary, by Todd Bensman, Center for Immigration Studies, November 30, 2020]. Now, Melugin has disclosed, citing documents obtained by The Heritage Foundation, Mayorkas brazenly lied when he pronounced himself “horrified” that border agents “whipped” Haitian colonists trying to jump the border last year. He knew the agents were innocent. So here’s another impeachable offense by the man who refuses to enforce U.S. immigration law.

The nut of the story: Hours after Traitor Joe Biden vowed that “those people will pay,” the unindicted, Cuban-Jewish visa fraudster appeared at a news conference with White House Spokesman Jen Psaki. At the time, a DHS email shows, Mayorkas knews a photographer on the scene exonerated the agents of wrongdoing:

Marsha Espinosa, assistant secretary of DHS public affairs, emailed Mayorkas and cc’d other DHS leadership, alerting them to a news article that showed that the photographer who took the images did not see any whipping. In the email, Espinosa highlighted the comments from the photographer where he directly says he did not witness any whipping.

“Our nation saw horrifying images that do not reflect who we are. We know that those images painfully conjured up the worst elements of our nation’s ongoing battle against systemic racism,” Mayorkas said.

🚨🚨: In Biden's America you're innocent until proven guilty--unless you wear a badge. The mounted Border Patrol agents in Del Rio were vilified by the Left, and @SecMayorkas kept lying about them even after he knew the truth.

DHS exonerated the border agents—they don’t carry whips—but they might still be punished… for securing the border of their country and stopping The Great Replacement.

When Mayorkas’ spoke at the news conference, he didn’t pull some cute stunt to get visas for wealthy foreigners. He boldly and knowingly lied about the men who serve their country in the Border Patrol. Understandably, the agents’ union wants him fired:

Mayorkas lied to Americans and pushed a narrative he knew was false while cowardly disparaging hard working Border Patrol agents who were doing their jobs. He has to go. https://t.co/Lq9bigeDtq

BP agents have "Honor First" pounded into their psyche non-stop. They risk their lives to uphold the laws of this nation.

Mayorkas took the same oath every BP agent takes. Yet he lies and throws BP agents under the bus to further his political agenda.

Something stinks in DC.

Disgraceful. Mayorkas knowingly sold out the honorable men a women of Border Patrol… all to curry favor with the Biden White House.