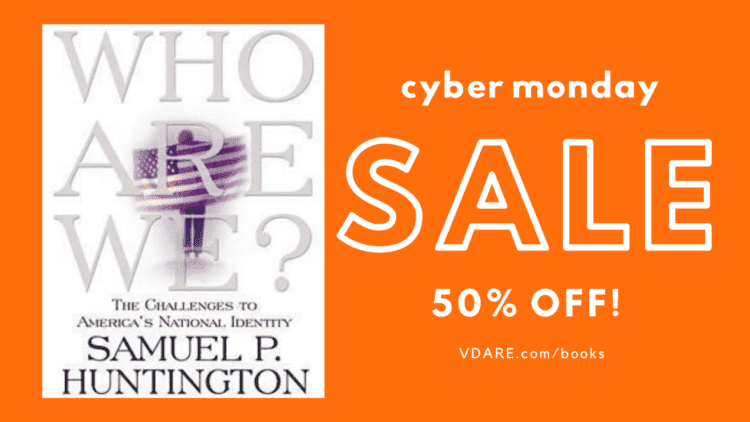 Bob Weissberg Review Of Cyber Monday Deal WHO ARE WE?: "The Perils of Keeping America America"

Robert Weissberg, who was "cancelled" by Rich Lowry for having given a mild and irenic speech at an American Renaissance conference, reviewed Samuel Huntington's Who Are We?—our Cyber Monday Deal—in 2004:

The Perils of Keeping America America 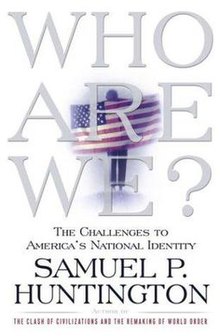 Samuel Huntington’s Who Are We? The Challenge to America’s National Identity barely hit the bookstores when it began to generate immense, often vitriolic, attention. In academic-speak, it is a “controversial” book–that is, it tells unembellished truths on countless taboo topics guaranteed to offend sensitive souls.

Who Are We? stridently defends an Anglo-Protestant, English-speaking, law-abiding, god-fearing, moralistic work-oriented culture in which a limited government deeply respects individual rights. It similarly stands up for what Huntington labels “The Creed”–the principles of liberty, equality, individualism, representative government, and private property. Both are, in his view, integral to our collective identity and together are, alas, under assault by a bevy of burgeoning forces ranging from multinational corporative executives bemoaning national borders as commercial nuisances to media moguls who genuinely despise WASP culture–not to mention academics preaching a cultural relativism that rejects patriotism as “dangerous.”

First, envisioning America as “a nation of immigrants” in which our culture comprises little more than a shifting average of those fresh off the boat is a grievous error. Settlers–the Pilgrims–who brought their distinctive WASP culture created America, and while each immigrant wave added distinctive touches (the German kindergarten, for example), these fresh arrivals largely absorbed this pre-existing foundational culture and creed. To assert that current immigrants enjoy an uncontested right to alter our self-definition is utterly wrong, even if they ultimately form a numerical majority. To repeat, the settler and immigrant distinction is critical–values are not all equal as societal building blocks.

Second, Huntington further argues that America is inescapably a religious Christian nation, and this is believed gospel, not perfunctory church attendance. Protestant (now vaguely called “Christian”) values reside in our national DNA, and these beliefs count save among certain elites construing a belief in Jesus as a dumb naïveté. Today’s secularist attack has nothing to do with restoring some make-believe “high wall” separating government and church; it has everything to do with subverting national character. [More]