VDARE.com On Clay Travis, Boobs And The First Amendment

What you see above is a screenshot   of a Google image search for "vdare" and "bikini". I swear most of them were posted in response to things about serious matters involving the National Question.

The girls on the beach, for example, are Northern Irish girls enjoying a rare, for County Antrim, stretch of warm weather, and there's a Swedish lady cop in a bikini using unarmed combat techniques on (probably)  a Gypsy pickpocket. The two ladies flanking Senator Menendez—a white Hispanic in a blue suit—are the recipients of what Michelle Malkin called SleazeBob Menendez’s 36DD Visa Program, I.E. women who got visas because a Menendez donor was impressed with their qualifications. 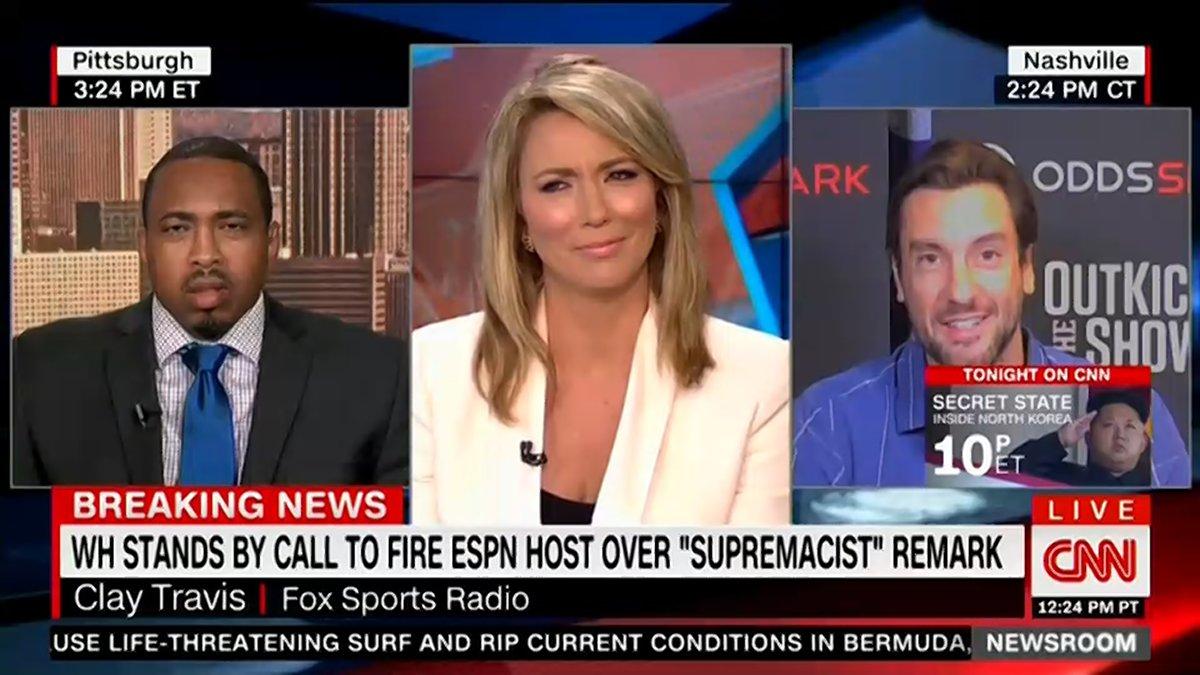 Which brings us to Fox Sports Radio host Clay Travis, who was thrown off CNN for saying that he believes  “in only two things completely: the First Amendment and boobs.” Clay Travis is the white guy at the right, and Brooke Baldwin, the blonde lady showing just a hint of cleavage, is the host who threw him off the show.

The black guy is there presumably because they were taking about Jemele Hill, a black lady who's not being fired for something they'd fire a white guy for.

Fox Sports Radio host Clay Travis shocked CNN anchor Brooke Baldwin on Friday by declaring on live television that he believes “in only two things completely: the First Amendment and boobs.” But the network really shouldn't have been surprised by Travis's crass remark. He has used the line before.

Travis, who also writes for Outkick the Coverage, appeared on Baldwin's afternoon show to talk about ESPN's handling of “SportsCenter” anchor Jamele Hill, who called President Trump a white supremacist earlier in the week. Travis's position is that Hill ought to be able to say whatever she pleases but that ESPN has acted hypocritically by keeping her on the air, after disciplining other personalities for making politically charged comments.

Travis has participated in similar discussions on other networks, having boosted his profile last month by being first to report that ESPN had reassigned a play-by-play announcer named Robert Lee who was originally scheduled to call a college football game in Charlottesville.

One one hand, the Robert Lee scoop makes Travis a logical guest for TV segments about ESPN's personnel moves. On the other hand, Travis's history makes him an obvious risk.[More]

Who knew you can't say "boobs" on CNN? Travis says he says it live on the air all the time. CNN says they're not inviting him on again, because they're a bunch of old ladies—like the WaPo's Callum Borchers, and everyone else treating this like it was Travis's fault.

Watch it on video: