It's unseasonably chilly in the Northeastern United States, but in Northern Ireland recently, it's been surprisingly warm. 73 degrees Fahrenheit, in fact. [Weather: Northern Ireland hotter than Rome or Madrid as it basks in 23C heat, By Cate McCurry, Belfast Telegraph, May 10, 2015]

Photographs like this weren't taken on the beach at Marbella, Spain, but in Portrush, County Antrim, Northern Ireland. This doesn't mean anything about Global Warming, because nothing means anything for sure about global warming, but what struck me is how "Northern Irish" these girls are, with names like McMaster and McCormick. 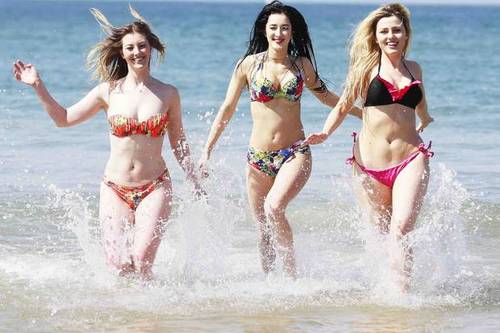 The Northern Irish are the same people we call "Scots-Irish" in the US—people who had moved from Scotland to Ireland, where they weren't entirely welcome,  and then moved to America because fighting wild Indians was less trouble.