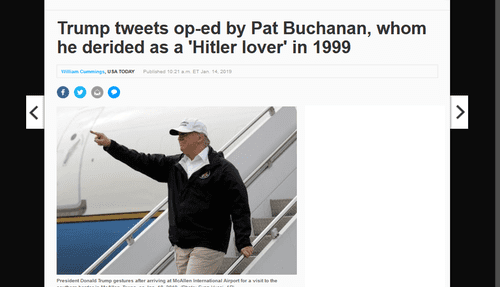 Recently the President quoted Pat Buchanan's latest syndicated column, which appears in many papers. William Cummings at USA Today is blaming us.(Link below, to Memo to Trump—Declare an Emergency!, is in the original.)

Twenty years ago, Donald Trump derided Republican firebrand Pat Buchanan as an anti-Semite, a racist and a homophobe. Now, as president, he is quoting him.

Last week, Buchanan posted an article on the anti-immigration site Vdare.com that implored Trump to declare a national emergency on the southern border, "because mass migration from the global South, not climate change, is the real existential crisis of the West." Trump has publicly considered such a declaration as a way to go around Congress in order to secure funding for a wall on the U.S.-Mexico border.

Pat didn't "post" it on VDARE.com, it's a syndicated column. Let me explain that slowly and carefully—anyone who pays a small fee can post a syndicated column, it doesn't mean that the writer is associated with the publication. (The syndication notice is at the end of the column Cummings is quoting—I've called this "guilt by syndication" in the past.)

On Sunday, the president quoted a portion of Buchanan's post in a pair of tweets. The first said, "'The Trump portrait of an unsustainable Border Crisis is dead on,'" and then listed a number of immigration-related crime statistics. Buchanan did not cite the source of the data, but the context indicated it was from the Trump administration.

Buchanan did cite a source—President Trump's Oval Office address. It's not from the Trump Administration, it's from the man himself, and is posted on the White House website.

The southern border "'is eventually going to be militarized and defended or the United States, as we have known it, is going to cease to exist. And Americans will not go gentle into that good night,'" the second tweet quoted.

Trump attributed the quote to Buchanan and added, "The great people of our Country demand proper Border Security NOW!"

Then Cummings drags up some things Trump said about Pat in 1999, when Trump was thinking of challenging Pat for the Reform Party nomination. Cummings [Email him] makes no attempts to factcheck those, because (a) he doesn't want to, and (b) he's not good at this factchecking thing, but we can't blame Trump—he lived in New York, and I assume he believed what he read in the local papers. He's learned better since!

Finally, Cummings pulls out the big guns against Pat. He says Pat is using "racially charged" language, which is anything a white person says about race and demography, and nothing a non-white person says:

In his Monday tweets, the president did not include some of Buchanan's more racially charged language from the piece.

"The more multiracial, multiethnic, multicultural, multilingual America becomes – the less it looks like Ronald Reagan's America – the more dependably Democratic it will become," Buchanan wrote in a section omitted from Trump's tweets. "The Democratic Party is hostile to white men, because the smaller the share of the U.S. population that white men become, the sooner that Democrats inherit the national estate.

"The only way to greater 'diversity,' the golden calf of the Democratic Party, is to increase the number of women, African-Americans, Asians and Hispanics, and thereby reduce the number of white men," Buchanan asserted.

It's true Pat said that (and there's no reason for Trump to include it in his border-focused tweets) but it's what the Democratic Party says all the time.

When they're not saying good things about diversity and changes in demography, they're saying bad things about white men. Ask Supreme Court Justice Brett Kavanaugh!