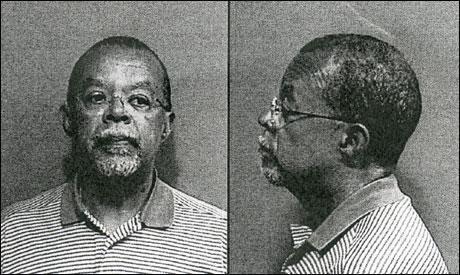 UPDATED: Who is "carrying racist thoughts?"

The Washington Post, which has business ties with the well-known chairman of the Harvard Afro-American Studies Department, Henry Louis Gates, has a long article about Prof. Gates' embarrassing arrest by the Cambridge Police Department last week after he had to break in to the house Harvard University provides him in Harvard Square, then launched into a tirade of accusations of racism against the white policeman sent to investigate the break-in.

Prominent Harvard professor Henry Louis Gates Jr. casts his arrest at his home last week as part of a "racial narrative" playing out in a biased U.S. criminal justice system. ...

"This guy had this whole narrative in his head. Black guy breaking and entering."

Clearly, though, Gates also had his own narrative in his head.

The Cambridge cops' reports were briefly up on the Boston Globe before being shoved down the memory hole. Larry Auster, however, has preserved them here. They make interesting reading.

When Officer Crowley told him he was "investigating a report of a break in [in] progress," Gates "exclaimed, 'Why because I'm a black man in America?'" Gates then proceeded to loudly make an ass of himself.

The cop reported, "I then asked Gates if there was anyone else in the residence. While yelling, he told me that it was none of my business and accused me of being a racist police officer."

My guess would be that by this point the cop thought it unlikely that this well-dressed middle-aged man was a common burglar, but was, consciously or unconsciously, becoming worried about a different scenario:

Q. Why would an extremely angry man break into his own house?

A. Because his wife had locked him out?

Q. What did this enraged man do to his hypothetical wife after he broke in, or what would he do to her after the police left?

When somebody is as out of control emotionally toward a policeman as Gates was, they are often a danger to other civilians, such as their loved ones. I presume that Professor Gates doesn't watch Cops much, but screaming It's None Of Your Business, You Racist at a policeman who asks if there is anybody else in the house is traditionally seen by policemen as a warning sign that there might be somebody else, or her corpse, in the house.

Making an ass of yourself shouldn't get you arrested, but anybody over the age of three should know that you speak to policemen in quiet, deferential tones. (Nor do you threaten a policeman's career by charging him with racism on no grounds.)

Why? Because they have guns. You don't want to get shot, and, more often than not, they'd prefer not to shoot you (which requires them to go downtown and fill out a lot of paperwork). So, they like to keep things on a civil plane where nobody starts getting an itchy trigger finger.

In Gates's defense, he was arriving home from China, and nobody is quite in his right mind when that jet-lagged.

But Gates, a master of the media game, is already planning to milk the unfortunate incident:

His next project on race, he said, will be rooted in his arrest. "I hope to make a documentary about racial profiling for PBS," he said. "[The idea] had never crossed my mind but it has now."

He said the documentary will ask: "How are people treated when they are arrested? How does the criminal justice system work? How many black and brown men and poor white men are the victims of police officers who are carrying racist thoughts?

Clearly, as Gates points out, we need to police the thoughts of the police.

Hey, I've come up with a name for the enforcement arm against racist thinking which Gates's logic demands: The Thought Police!

... I think it is interesting to compare Gates' story with the arresting officer's report.

Reading both suggests that the real problem was a contest over dominance or control, with Gates likely so adrenalized that he suffered ”auditory exclusion.”

”Auditory exclusion” is a well-known phenomenon, a side-effect of the ”fight or flight” adrenaline response, by which very excited people do not respond to nor remember hearing speech or even loud noises such as gunshots during periods of great stress.

Here's Stephen Hunter's description of this phenomenon that I quoted in VDARE.com in 2006 when reviewing his book American Gunfight about the 1950 shootout between Puerto Rican nationalists and Harry Truman's bodyguards:

"Physiologically, the fighters have entered a zone that cannot be duplicated by man. It has to be real for you to get there: you feel nothing, you see only a little bit of what's ahead of you, you hear nothing. "Auditory exclusion" it's called: your hearing closes down. Meanwhile your fingers inflate like sausages and your IQ drops stunningly."

Gates was obviously very excited and fearful as well as angry at the police officer and shouted* at the officer repeatedly. Gates claims the officer never answered, yet the officer claims that he did answer and Gates ignored him. The two stories are not inconsistent, because highly excited people commonly fail to hear things.

Furthermore, Gates was trying to dominate the police officer by shouting him down, repeatedly (per both stories) demanding the officer’s name and badge number (implictly threatening administrative punishment), and (according to the officer and other witnesses) calling the officer (with no evident basis) a racist.

The officer, like all police officers, has been extensively trained that he must establish and maintain control in every situation for safety reasons. Gates was trying to take control away from the officer; he wanted to officer to kowtow to him. According to the officer’s training, anyone who tries to take control away from the officer presents a threat, possibly a deadly one. Even if the officer might have realized, in quiet contemplation, that Gates had a 1st Amendment right to shout, at the moment of confrontation the officer was faced with a man who was trying to strip the officer of the authority he had been trained to maintain even at the price of violence.

As I pointed out above, it is perfectly plausible that Gates did not hear the officer’s replies to Gates (self-admitted) badgering ”What’s your name? What’s your badge number?”

(If Gates thought the officer was a racist, then Gates had even more reason to be hyper-adrenalized, since Gates would feel that he was confronting an armed racist likely to commit violence on Gates.)

(There’s certainly no evidence in any of the stories that the officer displayed any racism whatsoever. Investigating a report of a possible burglary with the citizen complainant standing by, bolstering her credibility by her presence and willing cooperation with the police, is not a ”racist” activity.)

Anyone who thinks police training with respect to ”control of the situation” can or should be revised would do well to think very carefully about the limits of human behavior under stress. It may not be possible to effectively train police officers to manage violent punks without giving them reflexes that produce the ”wrong” results when dealing with over-excited college professors.

The cop to Gates’ left is clearly trying to calm Gates down.

By the way, speaking of need for dominance, last week, I read Joseph Wambaugh's true crime book Fire Lover about John Orr, the veteran Glendale (California) Fire Department arson investigator. He became a legend in the arson investigation business for his uncanny ability to find the point of origin and the charred remains of the firestarting device.

The reason for his divining ability was that he was not just an arson investigator, but a mass-scale arsonist who started at least four score fires, and may well have started one thousand or more (the number of brush fires in Glendale the year after he was arrested dropped from something like 67 to 5).

The bastard set fire to quite a few stores where my mom shopped. He'd dropped a delayed-ignition device in the middle of the most flammable merchandise and stroll out, get in his Glendale Fire Department car, drive away, then, when the smoke was rising, ostensibly notice it, drive back and videotape the fire from across the street.

He was convicted in the arson murder of four people in a home improvement center in South Pasadena largely based on his novel/diary Point of Origins, he was writing about an arsonist (which was eventually made into an HBO movie with Ray Liotta).

The defining event of Orr's life had been that he had applied to be a Los Angeles Police Department officer when it was at the height of its reputation as the most professional department in the country in 1970, and been turned down as "psychologically unstable."

He then became a fireman because he needed a job, but the psychological rewards of being a fireman (as Wambaugh, who served in the LAPD from 1960-1974, says: "everybody loves a fireman") didn't fulfill him. He always told people he didn't want to be a cop, but he gravitated toward the most cop-like job in the fire business, arson investigator, and loved engaging in cop-like stunts like high speed chases and intimidating interrogations. (Presumably, cop turned novelist Wambaugh found Orr, the quasi-cop turned novelist/criminal, intriguing in a sort of evil twin way).

Eventually, Orr acted out his need for dominance by terrorizing people with fire.

The good news about people that screwed-up morally is that they are generally screwed-up in terms of being effectual as well. Orr reminds me a little of Hitler, in that he was a messed-up authoritarian personality with ambivalent feelings of resentment and admiration toward the most prestigious local authority hierarchy (the LAPD, the German Army officer corps), and highly effectual, although Orr was a lot more heterosexual than Hitler (when arrested, this pudgy non-descript guy was splitting his week between his fourth wife and his mistress), and his obsessions, fortunately, were more private than public.

And to get totally off the topic of Henry Louis Gates, I just noticed Inductivist's posting on JP Rushton's new work on a General Factor for personality, which seems relevant to Orr.

To be really reductionist about it, people can be classifed into one of four categories: 1) smart-good; 2) smart-bad; 3) dumb-good; and 4) dumb-bad. And since intelligence and pro-social behavior are positively correlated, as Darwin suggested, there may be more people in categories 1 and 4 than in 2 or 3.

We are lucky that Category 2 smart-bad folks like Orr are relatively rare. Rushton's theory suggests why that may be.