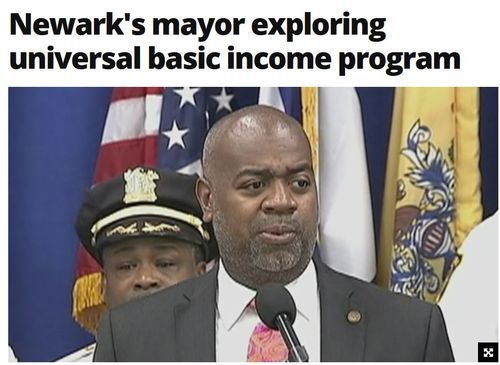 Democrat Andrew Yang's campaign for a Universal Basic Income (UBI) is winning a great deal of support from frustrated Donald Trump supporters and the online activists of the Dissident Right. (I've been calling for a UBI since 2013.) However, the real test is how such a program would function in America's major cities. There may be an upcoming experiment in UBI in Newark, New Jersey, universally regarded as one of the worst cities in America following the race riots of the 1960's.

Newark Mayor Ras Baraka says the city is going to study a pilot program to provide a universal basic income, or basically guaranteeing income for all residents whether they have a job...

"We believe in Universal Basic Income, especially in a time where studies have shown that families that have a crisis of just $400 in a month may experience a setback that may be difficult even impossible to recover from," Baraka said.

He noted that a third of the city still lives in poverty.  He didn't release any more details on the plan, like how it would be funded or when a final decision would be made.

There has not been a successful long-term Universal Basic Income program.  A small basic-income program that was tested in Finland was ended after one year.

A fun fact about Mayor Baraka is that he's the son of poet Amiri Baraka. Amiri Baraka built a career on ferociously anti-white invective and complaining about white racism. The System heaped honors upon him in response. In a typically hateful poem entitled "Who Blew Up America," Baraka fumes about the evil of white people, which is fine and even praiseworthy, but in passing asks "who told 4000 Israeli workers at the Twin Towers, To stay home that day, Why did Sharon stay away?" That did it, and Baraka was stripped of his status as New Jersey's Poet Laureate.

Still, none of this harmed the political prospects of Baraka the younger, who is now in his second term.

Another city that is trying UBI is Stockton, California, a city that has been utterly devastated by mass immigration and the housing crisis. It declared bankruptcy in 2012. Thanks to grants, it's also trying a UBI experiment, offering $500 a month to more than 100 residents .[A California City is giving 'no strings attached' money to residents. Here's why. by Dominque Mosbergen, Huffington Post, February 17, 2019]

Of course, there is one important difference. Under Yang's plan, the UBI replaces the welfare state. Under these local plans, presumably UBI will simply supplement the welfare state. In the unlikely event Yang is elected (or some other candidate steals his plan), UBI may end up functioning this way anyway, as nothing is harder to repeal than an existing welfare program.