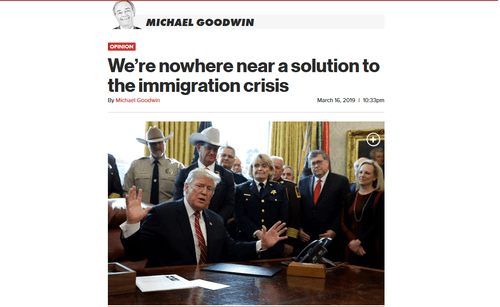 Rational Immigration Policy Never Seems To Get Any Closer

The reality of what is happening on the border now must take precedence over past sins. [I.e. Trump's sins of taking "his eye off the border-wall issue for too long"; the sins of congressional Republicans who "were eager to see him fail"; and the sins of congressional Democrats who were "determined to block his wall and make it a metaphor for White House chaos."] The future is also being spoken for, in that failure to stop the flow guarantees that disputes over what to do about those already in America will divide our nation for another generation at least.

Today’s illegal crossers, tens of thousands of them minors, will be tomorrow’s “Dreamers” and the object of sympathy and special pleadings. Meanwhile, solutions to long-standing issues like chain migration, visa overstays and guest workers seem even further out of reach.

The net effect of inaction is that the far-left radicals who believe compassion requires America to have virtually open borders are winning. They demonize all restrictions as racist and xenophobic, and will never be satisfied until all distinctions between legal and illegal immigrants are erased.

We already see that in the move by blue states mostly to let illegal immigrants get driver’s licenses and vote in municipal elections. Health benefits and college scholarships are being created specifically for illegals, as if their unlawful arrival here makes them extra deserving of taxpayer help.

Traditionally, legal immigrants had to be self-supporting or have a financial sponsor. Now the uninvited are expected to be dependent on government support.

It has been obvious for decades that the first order of immigration business is securing the border so we can decide which people, and how many, come into our country. Then the nation could turn to the trickier issue of those already here.

It is profoundly disheartening that we have not taken even that elementary first step, and have instead made the problem exponentially worse. So the president is doing the right thing by fighting for a secure border, but nobody should be fooled into thinking we are anywhere near a solution to the immigration crisis.

Writing critical commentary about U.S. immigration policy is a real test of stamina. Among those of us who've been working this beat for twenty years and more, are there any who would have believed, back then, that as we head into the third decade of the 21st century, things would be worse than ever? I don't believe so.