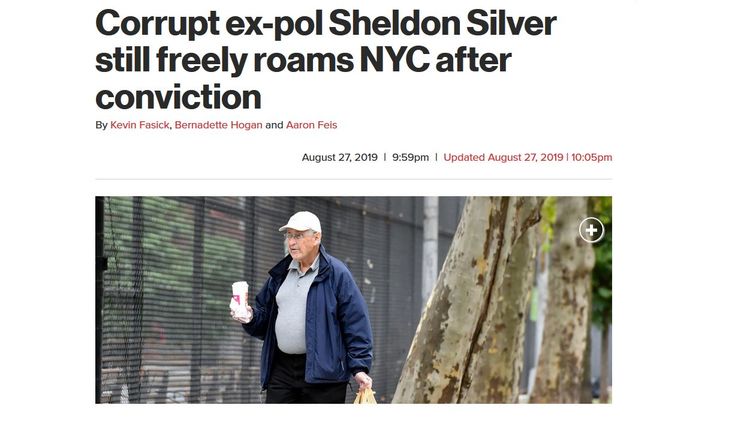 See, earlier, by John Derbyshire: Do We Have Government Of Laws, Or Not?

My morning drill is to read the New York Post over my breakfast, then power up the computer and browse the news and opinion websites. It thus happened that I read James Kirkpatrick's column about the railroading of Steve Stockman right after this one in the New York Post. Headline: Corrupt ex-pol Sheldon Silver still freely roams NYC after conviction.

For non-New Yorkers, let me explain. Sheldon Silver was for years one of the most powerful legislators in our state. He sat in the state assembly, the lower house of New York State's legislature, for over thirty-eight years. For the last twenty-one of those years, under five governors, he was Speaker of the assembly.

For all those years Silver was a front man for the trial lawyers, receiving millions of dollars from big law firms for legislative favors. This was an open secret. New Yorkers were grumbling about it, and local tabloids were passing scathing comments about it, back in the oughties when my kids were in middle school.

Silver's a Democrat, though, in a heavily Democratic state; and he's a master manipulator of the legislative process, so for years — decades!—he skated.

At last prosecutors caught up with him. He went to trial four years ago and was found guilty on all counts. He got a twelve-year sentence and seven million dollars in fines.

Then we were off to the races. Out on bail, he appealed. A year later, the conviction was overturned on a technicality. The feds tried him again last year; again he was found guilty on all counts. Again he appealed. Let Tuesday's New York Post pick up the story here. Quote:

A three-judge panel heard arguments from both sides in March but have yet to issue a ruling.

They could either uphold the conviction—leaving Silver the option to appeal to the U.S. Supreme Court—or overturn it, meaning he could face a third trial.

And all that time, since he was found guilty the first time four years ago, Sheldon Silver hasn't done an hour of jail time. Not only is he a free man; he's been drawing a state pension from his assembly years of nearly $7,000 a month.

This guy is 75 years old. If this current appeals panel re-affirms his conviction and he appeals to the Supreme Court, he might easily string this out for a couple more years. If they overturn his conviction and the feds go for a third trial, Silver could be in his eighties before anything happens to him, if anything ever does.

Here's another one of those shining ideals that I'd like to think America strives for, one of those things that in my personal vision is part of Who We Are: "Justice delayed is justice denied."

I understand of course that the legal process needs to be punctilious. Prosecutors have their own biases and agendas; some of them are fools and rogues. There is such a thing as being over-punctilious, though.

Sheldon Silver is a crook. Everyone in New York has known that for twenty years. I knew it; my neighbors knew it; it was common gossip; as they say in Ireland, "even the dogs in the street knew it." It's amazing that he got away with it as long as he did. It's disgraceful that he's still getting away with it.