If there’s a worse advertisement for the libertarian cause than the anti-sovereignty declarations of the unpatriotic editor of Reason magazine, I have never seen it. Katherine Mangu-Ward [Email her] was recently quizzed by Tucker Carlson about the sketchy “rights” of illegal aliens, like DACA moochers for example. Also joining in the conversation was Mike Donavan, CEO of Nexus Services which provides services for illegal aliens like bail, so he is likewise an enthusiastic globalist. It was an open-borders firefight, with Tucker standing up for American citizens and the nation state.

TUCKER CARLSON: So Katherine, as a sincere libertarian, let me ask you a philosophical question: do we have an obligation to put the interests of American citizens ahead of the interests of immigrants?

KATHERINE MANGU-WARD: No I don’t think so and in particular I think in this case we don’t get priority in this case I just don’t buy it. All that those things are in conflict.

CARLSON: In general. you don’t think that American citizens ought to get meaningful priority over aliens.

MANGU-WARD: I don’t know what this means to say — meaningful priority over aliens. American citizens benefit when people come here work here, raise families here, and it is absolutely the case that these dreamers in particular are going to add to our economy add to our culture make America a better place

MANGU-WARD: Well I mean I think you could ask similarly, do I favor protectionist policies, do I think if a job could be here or a job could be in China is it morally better for the job to be here? I think the answer is no in that case too.

CARLSON: I vehemently disagree with you but I want our viewers to know what your position is on that. So this is not an abstract question because there are a ton of unemployed Americans, almost 100 million actually — not all of them want to go to work, but I think we could all agree a lot more of them ought to be working than are. Why would we be issuing any work permits to anybody from outside the country until those people have jobs?

And so it went with more of the same. These globalists believe it is totally fine for illegal aliens to take jobs in the US that by law are supposed to go to citizens and legal immigrants only. The citizens pay the taxes and fight the wars to keep the country going, while invasive foreigners come only to loot the wealth.

Below, citizens participated in a Washington DC No Amnesty rally in July 2015 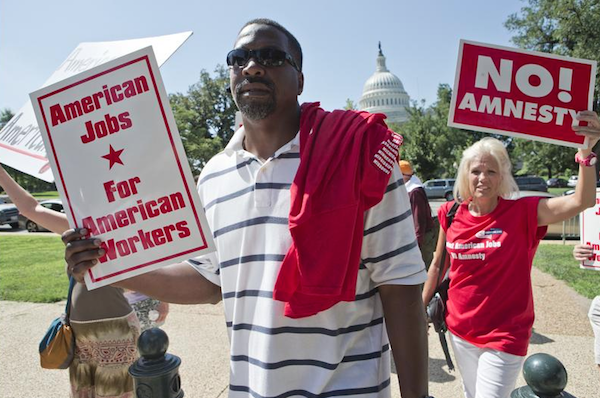 The ongoing liberal freak-out about DACA aliens overlooks the fact that many of those foreigners are occupying jobs that by law should go to citizens. For example, Apple CEO Tim Cook has bragged that his company employs 250 DACAs — does he think working for Apple is a job that real Americans just don’t want to do? Radio show host Laura Ingraham has also spoken out about the forgotten citizens, remarking recently, “Americans are dreamers too. . . I think there are a lot of folks who listen to my show who turned out at these rallies for Donald Trump who really loved his America-first message and I think there are ways to be compassionate to people short of giving them work permits and federal benefits.”

Candidate Trump ran on an Americans-first platform, but his support for a DACA amnesty leaves citizens high and dry at the feet of open-borders globalists once again. We voted for national sovereignty, law and borders, but we are getting an amnesty process started less than one year into the new administration.