A former Justice Department official accused President Donald Trump of flouting federal laws by inciting insurrection with a series of tweets calling for states to be liberated from stringent "stay-at-home" orders amid the coronavirus outbreak.

In a series of tweets on Friday, Trump appeared to call on his supporters to "liberate" themselves from strict state policies aimed at keeping residents safe amid the pandemic.

Then, the president called on supporters to "LIBERATE VIRGINIA and save your great 2nd Amendment," warning his followers: "It is under siege."

While Trump has defended the tweets, claiming that some state policies are simply "too tough," Mary McCord, a former acting assistant attorney general for national security at the U.S. Department of Justice warned that the messages could violate federal law.

In an interview with Newsweek on Sunday, McCord, who penned an op-ed in The Washington Post accusing trump [sic]of inciting insurrection against duly elected governors, said that while it would likely be difficult to actually convict Trump of such a crime, the president's tweets were extremely "dangerous."

"You have to be able to prove intent for many crimes," McCord, who currently serves as the Legal Director at the Institute for Constitutional Advocacy and Protection at Georgetown University, said. "The point of the piece was not necessarily to say he should be prosecuted; it was to show how our code treats... incitement as criminal because it's very dangerous.

I'd like to ask whether Mary McCord, who was working in government during the Obama years, and involved in the failed Russian meddling investigation, is familiar with what happened when Barack Hussein Obama took up the cause of Black Lives Matter?

The answer is nationwide riots and murders, which the President supported and approved of.

Oh, he sort of spoke out against the rioting, as in this quote, but you can see where his heart was:

Those of you who are watching tonight understand that there’s never an excuse for violence, particularly when there are a lot of people in goodwill out there who are willing to work on these issues.

On the other hand, those who are only interested in focusing on the violence and just want the problem to go away need to recognize that we do have work to do here, and we shouldn’t try to paper it over. Whenever we do that, the anger may momentarily subside, but over time, it builds up and America isn't everything that it could be.
And I am confident that if we focus our attention on the problem and we look at what has happened in communities around the country effectively, then we can make progress not just in Ferguson, but in a lot of other cities and communities around the country. [Remarks by the President After Announcement of the Decision by the Grand Jury in Ferguson, Missouri, November 24, 2014 ]

But when when rioters burned and looted in Ferguson, President Obama sent Federal authorities to attack the Ferguson police department, and when they burned and looted in Baltimore, he sent a black White House aide to attend the funeral of the drug dealer whose accidental death (after he was arrested for being armed with an illegal knife) was the cause of the riots.

Below, one of the famous split screens from Obama's statement above, while blacks were rioting. 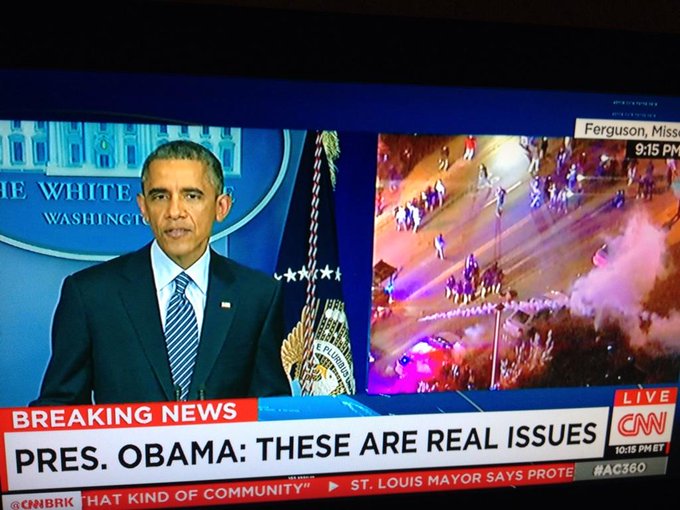 The MSM insisted that these weren't riots. In the Atlantic, in 2016, Molly Ball wrote that

Some have argued that Trump's nomination may have come as a white backlash to events like the Ferguson protests, which Trump has called “race riots.”

Well, any normal person would call them that, and would see that the President at that time, Barack Obama, supported and encouraged them. Can we prosecute him, Ms. McCord?