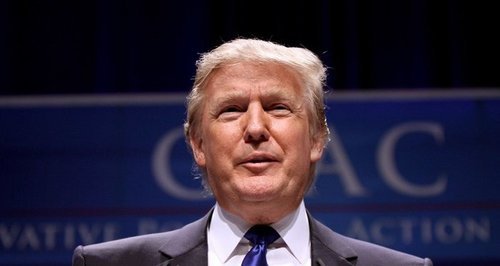 Guess Which Republican Has The Highest Favorability Rating Among Hispanic Voters? Donald Trump!

This is interesting.  In a survey conducted by  Public Policy Polling on July 20th and 21st, guess which Republican candidate had the highest favorability rating?

Now, a big fat caveat is in order.  This was not a poll in which the respondents selected the candidate they prefer, it was simply a favorability rating. Note that the highest Republican  rating (Trump's) at 34% was not that high.  The two  leading Democrats did better among Hispanics. Hillary had a 50% favorability rating, with Bernie Sanders at 38%.

Nevertheless, taking that caveat into consideration, I think this is interesting and something to work with.   Despite all the hysteria about Trump supposedly "losing"  the Hispanic Vote, the candidate still had the highest of all (admittedly low) favorability ratings among Republicans.

Especially delicious is the fact that Trump's favorability rating among Hispanics was 3 points higher than Jeb "My Wife Is Mexican" Bush.

Regarding Trump and the Hispanic Vote, I'd like to see him (and other candidates) move away from the whole Latino Vote Paradigm and start appealing to Hispanics as Americans.    I seriously doubt that Republicans would do any worse by doing so, and they might even do better.