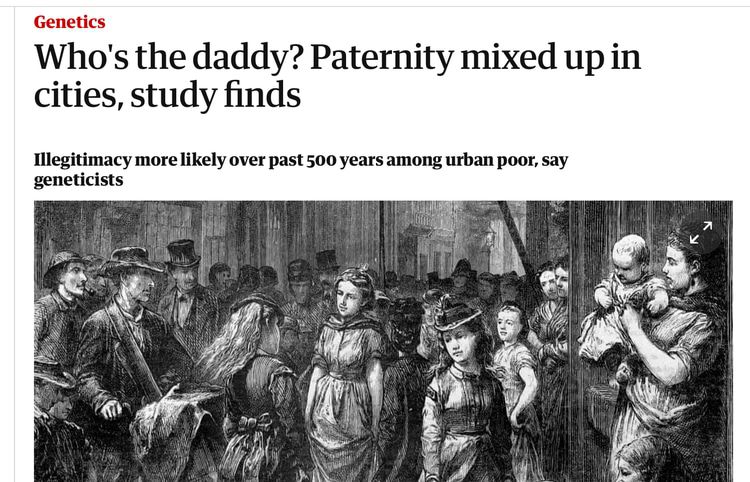 Cuckoo's Egg Babies in Europe Were Historically Rare, Except Among Urban Poor

Now, researchers have found that some people have more reason to doubt their fathers than others, or at least have had over the past half millennium.

If the family tree is peppered with labourers and weavers who crammed into cities in the Industrial Revolution, a deep breath might be in order.

The scientists found that in western Europe over the past 500 years, births from extramarital couplings were as low as half a percent for farmers and the rural middle and upper classes – strata occupied by well-off merchants, lawyers, skilled craftsmen and the like.

But among the lower classes, populated with labourers and people without steady work, the rate of illegitimate births reached a peak of nearly 6% in the densely populated cities of the 19th century.

Maarten Larmuseau, who led the study at the Catholic University of Leuven, had anticipated more illegitimate children born into the higher echelons of society. After all, he notes, in paintings, plays and literature, dubious paternity controversies seem a particular affliction of the aristocracy. “I was surprised to see this signal so prominently,” he said. “It was not what I expected.”

Writing in Current Biology, Larmuseau describes how birth rates from extramarital sex were stable over the 500 years, standing at about 1% for Belgium and the Netherlands, despite their religious differences.

But the rates varied widely across different groups. Class had the greatest impact, with the rate falling from 4% in the lower classes to 1% in the middle and upper classes.

Where people lived had an impact too. Added together with class, the rates shifted to 0.5% among well-off country folk to 6% among the poorest in bustling cities.

This was measured by looking at pairs of distant male (apparent) cousins with the same surnames from the same forefather roughly 500 years ago. If there was no hanky-panky, they should both have the same Y-chromosome.

The sample size was 513 pairs, which sounds small, but you are looking at maybe 20 generations each, so the total sample size would be around 10,000 conceptions, with about 1% or 100 being cuckoo’s eggs.

There might be a slight downward bias from looking at males because it’s possible that the birth of a son might make a man more likely to marry or stay married to his son’s baby momma.

Then again, I can think of a number of highly successful men, such as Gerald Ford and Jeff Bezos, who were adopted by their mother’s second husbands, who proved to be fine stepdad.

Another methodological issue is that this 1% figure is probably depressed by survivor bias: Until 150 years or so ago, childhood mortality rates were huge, and were partially correlated with how much money dad brought in. If the husband had his reasons to suspect his wife’s fidelity, probably the chances that he’d one day walk out were higher, which could lower his nominal’s son’s chances of survival.

And yet another methodological issue that they might or might not have dealt with is that they can’t count multiple cuckoo’s eggs in the same line. Say they are looking at two distant nominal cousins, but they turn out discordant for the Y-chromosome. Was just one of the lineages over the last 20 generations discordant just once. What if both lineages were discordant three times? You might be able to adjust that with good math, I don’t know.