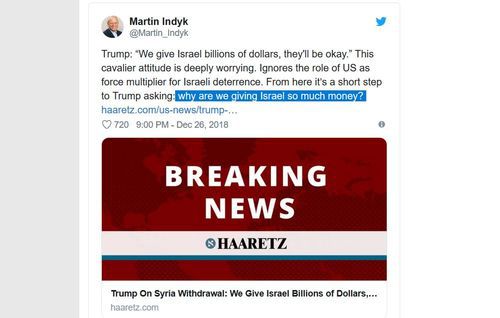 Trump On Syria Withdrawal: We Give Israel Billions Of Dollars, They'll Be OK

Trump: “We give Israel billions of dollars, they'll be okay.” This cavalier attitude is deeply worrying. Ignores the role of US as force multiplier for Israeli deterrence. From here it’s a short step to Trump asking: why are we giving Israel so much money? https://t.co/et2HpO5W0R

This is what worries the Establishment most about Trump: the terror that he might ask some common-sensical but verboten question like:

Why do we give Israel so much money?

If we take in dumb immigrants, won’t they have dumb kids?