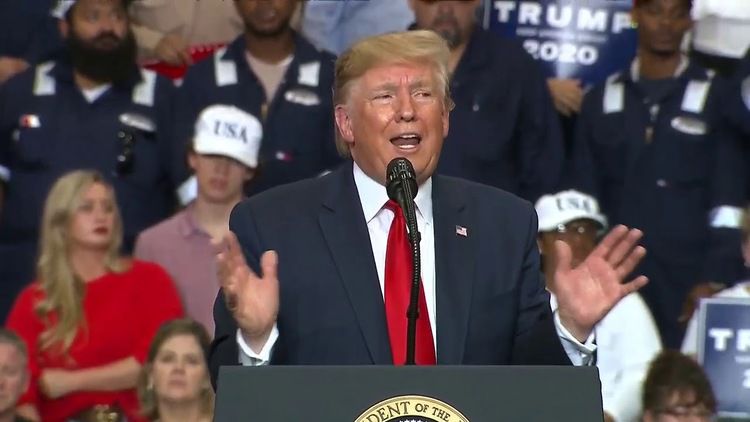 Earlier: Donald Trump Calls Out Invade-The-World/Invite The World Pundits In Almost Those Words

Trump at a rally in Monroe, LA, called out Invade the World/Invite the World again. He didn't mention Bush or Obama by name, but they're both guilty of that.

Here he is talking about it.

I was elected to be the President of the United States, not the President of the world. After years of rebuilding other nations, we are finally rebuilding our nation. And we are finally putting America First, haven't heard that for a long time. Past leaders transformed faraway nations into chaotic war zones, then they demanded that American citizens accept unlimited migration from those terror-afflicted regions, stamping their visas for travel straight into your communities—not anymore.

My administration implemented the travel ban to block migration from some of the world's most dangerous and deadly places. And we're keeping terrorists, criminals, and violent extremists the Hell out of our country. That's what we're doing. On no issue have Democrats more totally betrayed you than immigration.

They threw you open, and you saw it, all through the years. They threw open your borders to drug dealers, human traffickers, and to vicious MS-13 gang members, and now, we're getting them out of the country by the thousands. Thanks to our tireless efforts to secure our Southern border, illegal crossings have now dropped 70% since May.

And when you look at what's happening over there, there's a good reason for what we're doing. We are building that wall faster than anyone thought it was possible to build, the Army Corps of Engineers. We're also confronting the deadly menace of sanctuary cities, which release dangerous criminal aliens into your neighborhoods, school zones, and city streets.

Republicans believe our cities should be sanctuaries for law-abiding Americans, not criminal aliens. And Republicans will always stand with the heroes of ICE, Border Patrol, and law enforcement. In the last administration, vile slanders of our police went unanswered and unchallenged. Now, we are once again condemning anti-police bias and giving our officers the respect that they so rightly deserve.