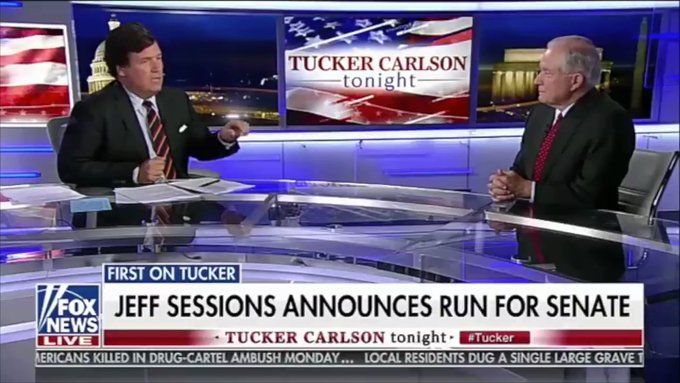 This is a crucial time in our nation's history. The left has become unhinged and they are threatening the very things that make America great. I'm running for U.S. Senate because we have to fight back. Let's go! https://t.co/E1Ti9aYKNT pic.twitter.com/IlueZhTiT4

A major point in his announcement video was emphasizing his loyalty to President Trump in spite of their past differences.

"As everyone knows, President Trump and I have had our ups and downs. But here’s the important part: the President is doing great work for America," Sessions said. "When President Trump took on Washington, only one Senator out of a hundred had the courage to stand with him: me. I was the first to support President Trump. I was his strongest advocate. I still am. We must make America great again."

He drove home this point in an appearance on “Tucker Carlson Tonight.”

.@jeffsessions: "If I return to the Senate, no Senator will be more effective in advancing President Trump's Agenda than I would be."@TuckerCarlson: "I believe that, and I was there before Trump arose and you were making the same case that he is making now."

It’s terrific news that Sessions is running again. His immigration patriot credentials are impeccable and he would be a god-send in the Senate, especially if Trump wins re-election. However, his main problem is Trump. The White House is opposed to his nomination and the president may try to deflate it with a tweetstorm.

However, there is a chance that Trump reconsiders his opposition. Both Tucker Carlson and Laura Ingraham support Sessions and their respective primetime Fox News shows could persuade the president to lay off his former Attorney General.

Sessions was a terrific Senator and would be a huge help to the Trump agenda on the Hill.

Time will tell what happens in Alabama, but things look good for Sessions—so long as Trump stays quiet.