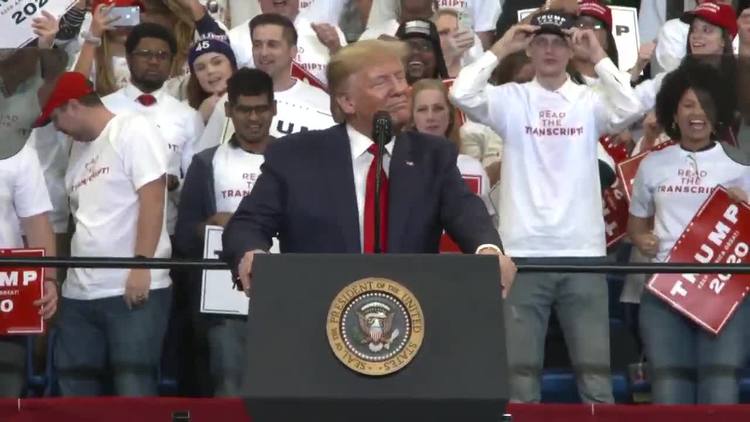 Trump In Kentucky On Immigration: Emphasizing Travel Ban Win And Cooperation With Mexico

We like to highlight what Trump is saying about immigration in his rallies, because the MSM won't.

Here's an example from his rally in Kentucky

My administration implemented the travel ban on some of the world's most dangerous countries. A lot of people were against it. They said, isn't that terrible. Countries that have crime rates that are so high, you wouldn't even believe it's possible, and we have a travel ban now. We don't take people from those countries, I'm sorry.

And we won a historic victory on the travel ban in the United States Supreme Court, ruled it totally constitutional. On no issue have Democrats more totally betrayed you than on immigration. Democrats want open borders. They want to give illegal aliens free healthcare, free education, more advantages than our own citizens have, and more benefits than our own military gets.

[Audience shouts "Boo"] In the Republican Party, we believe in taking care of our own citizens first is paramount. Thanks to our tireless efforts to secure our Southern border, illegal crossings have dropped 60% since May, the wall is being built, it's going up rapidly. It's got a big impact and I want to thank Mexico.

It's amazing how unhappy his cooperation with Mexico has made the Treason Lobby. Their legislators and judges can stop him from building a wall or deporting people, but they can't keep Mexico from cooperating with the President of the United States to stop illegal immigration.

The important point is that while he talks in these rallies about a fair and "lawful" system of immigration, he never talks about increasing legal immigration, which seems to have been Jared Kushner's idea.

Unlike a lot of Presidents, Trump in his rallies is exposing himself directly to grassroots opinion.

There's an old joke about a large multinational dog food company that comes out with a new dog food, approved by nutritionists, the sales and marketing staff, the CEO and the board, but which totally fails to sell. The simple explanation, from a lowly employee: "The dogs don't like it!"

If Trump says something to his base in a rally that they don't like, he hears about it.