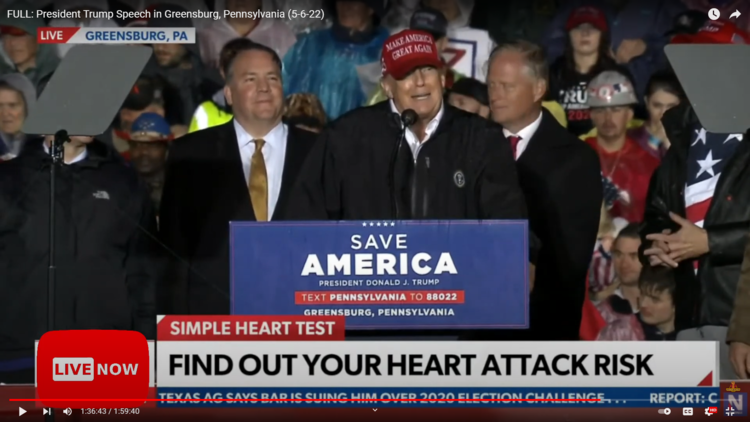 The crowd at POTUS 45 Trump’s Save America rally in Greensburg, Pennsylvania, last night didn’t exactly “repeatedly boo” Trump-endorsed Senate candidate Mehmet Oz. But neither did the MAGA worthies bellow full-throated support. That aside, Trump went beyond the usual denunciation of illegal immigration and said refugee resettlement and legal immigration must stop.

The reaction to Trump’s endorsement of Oz—”he’s a great man…who truly believes in Make America Great Again”—was, however, certainly mixed. Some boos. Some cheers. Again, the crowd wasn’t overwhelmed.

Trump: We have to secure a massive victory for Dr. Oz
Crowd: *reacts* pic.twitter.com/LGkViJh31e

As for The National Question, with customary brio Trump vowed that Oz will fight “illegal immigration and sanctuary cities.”

If the GOP retakes Congress in November, Trump suggested legislation to stop Let’s Go Brandon from dumping illegals into the heartland, and did say, importantly, “our country is full” and cannot continue to import “migrants” who don’t belong here. That suggests legal immigration must end, too.

Unlike his performance at the rally at which he endorsed Ohio Senate candidate J.D. Vance, Trump discussed legal immigration and Biden’s plan to bring in at least 250,00 refugees:

Biden has blown out the refugee cap by 800 percent-plus. Think of that. We had a cap on the number of people that could come into our country. He’s 800 percent above the cap and that doesn’t include the ones that come in legally, which is frankly most of them, including bringing in tens of thousands of unvetted unscreened foreign nationals from Afghanistan on the planes, hundreds of thousands of people and only 3 percent qualified to come in some of them are terrorist. …

Trump didn’t go overboard, and did not, unhappily, discuss the never-ending push for more foreign workers, and not just among Treason Lobby Democrats.

But at least he discussed refugees. That’s a start. It’s time for Trump to ignore Stupid Party Brain Trusters and to stop ignoring the bigger problem. Illegal immigration is easily addressed. Put U.S. troops on the border, immediately deport any illegal caught by border agents, then round up and deport every illegal in the country. Trump’s opposing a mass invasion of illegals is hardly going out on a limb. Even Democrats don’t want Brandon to lift Title 42 expulsions.

Trump must discuss legal immigration—refugees and foreign workers—at length at one of his rallies. That will get just as many cheers, if not more, from the working- class whites to whom he appeals.