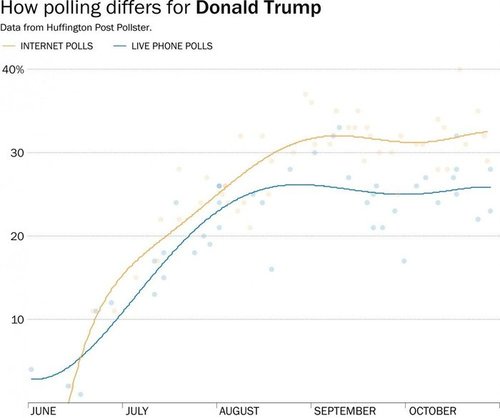 If you were looking very closely on Tuesday you might fleetingly have seen a reference to a Reuters/IPSOS poll which gave Trump 32%, Carson 20.2% and Rubio 11.6%. You had to look closely (I was) because almost all MSM attention was concentrated on cheerleading a Wall Street Journal/NBC poll the same day which showed Carson 29% Trump 23% and Rubio 11%.

(As it happens, two subsequent polls have validated the Reuters results, as ZeroHedge notes today in Spot The Odd Poll Out.)

This is the same poll I posted last week that showed Carson suddenly bouncing out to a seven-point lead. On the one hand, it’s an online poll; on the other hand, it’s a poll of likely Republican voters, not just registereds. (And a big sample too.) Trump now back on top of Reuters national tracking poll, leads Carson by double digits among likely voters November 3, 2015

This caused Philip Bump at The Washington Post to write an interesting article Is Donald Trump or Ben Carson leading? It depends on whether a real person asks. Nov 3 2015

We noted last month that Donald Trump tends to do better in online polls than in live-caller polls...

There are a lot of theories as to why there exists the particularly large gap for Trump in terms based on methodology, some of which are examined here. In short, it seems that having to talk to another person to weigh in on your voting choice might affect what you're willing to say.

The link is to the jonrobinson blog which remarks

Trump support among polls without an interviewer has been anywhere from five to ten points higher than in polls with interviewers since Trump's rise in the polls began in July. No other Republican or Democratic candidate displays this behavior …and throughout Trumps rise the differences between the two lines meet this semi-standard threshold for statistical significance…

This of course is exactly what I forecast in Carson And Trump: Time To Consider the Bradley/Wilder Effect. This term derives from the Governor’s races in 1982 in California and 1989 in Virginia in which the votes for the two Black candidates fell far short of what the polls had predicted.

Declaring loyalty to Trump defies the MSM and risks angering Leftists, GOP Establishment types, and maybe any Jews present. It is not cool!

Towards half GOP supporters polled consistently support the most non-Establishment names they can see. My contention is that a good proportion of Carson supporters are tacit or discreet  Trump votes.

The AdelZuck Party is in trouble.