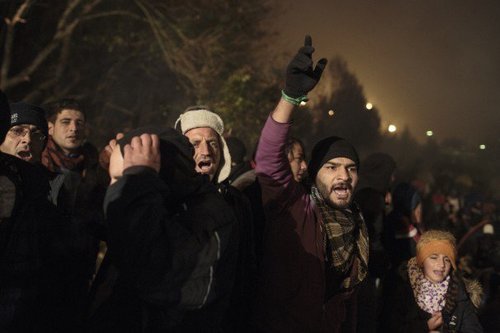 EU: Up to 3 Million More Migrants by End of Next Year

LONDON — The European Union predicted Thursday that up to 3 million additional asylum seekers could enter the 28-member bloc by the end of next year, suggesting the staggering pace of new arrivals in recent months shows no sign of abating.

The forecast, buried in a 204-page report on the future of the European economy, will add to an already burning debate in Europe about whether the continent can handle the influx, which has broken all modern records.

So far this year, more than 760,000 people have entered the continent seeking refuge or jobs, according to the U.N.’s refugee agency. The new arrivals have badly strained government resources in countries all along the trail, which leads from the Mediterranean Sea in the south to richer nations in Europe’s north.

One of the more affluent countries, Sweden, said Thursday that it would apply for emergency E.U. aid, an admission that it is failing to cope. Sweden, which has taken the largest per capita share of refugees of any E.U. country, is expecting 190,000 asylum seekers this year — double its previous record.

“The major problem today is that the number of asylum seekers is growing faster than we can arrange for accommodation,” Morgan Johansson, the minister for justice and migration, told reporters. “Sweden can no longer guarantee accommodation to everyone who comes. Those who are arriving could be met with the news that there isn’t anywhere to stay.”

The Swedish Migration Agency said it would house 50 migrants in its headquarters, having run out of space in hotels, apartment buildings, tents, old army barracks and converted prisons.

“If managed properly, the inflow of refugees will have a small favorable effect on growth in the short and medium term,” the report concluded.

It’s good for The Economy, so that settles that.

That view is deeply controversial in Europe, which has been polarized by the crisis. Viktor Orban, the nationalist prime minister of Hungary, said Thursday that Europe needs to encourage its citizens to have more children instead of welcoming refugees from South Asia, North Africa and the Middle East. “The survival of our civilization and our culture is at stake,” he told a conference.

The prediction of 3 million additional asylum seekers by the end of 2016 was based on an expectation that the pace of arrivals will remain in line with the extraordinary levels experienced in Europe in recent months. The numbers were not forecast to decline until 2017.

When all the problems of the world will no doubt be settled, so nobody will have an excuse anymore to head to Europe.