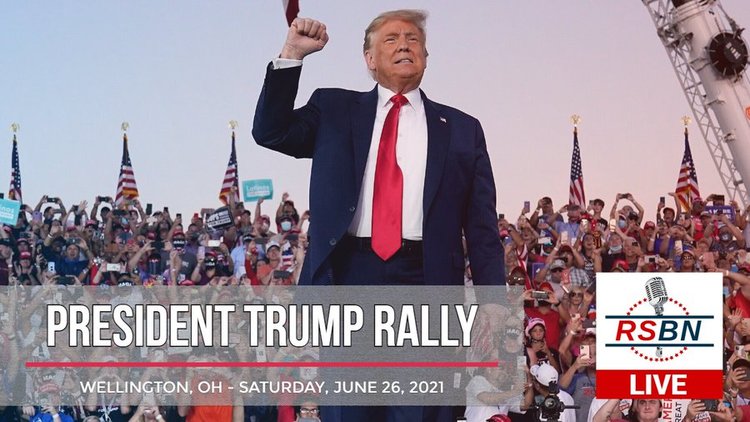 Trump Attacks Biden Border Rush At Ohio Rally, Reads "The Snake"—But Needs To Call For A Moratorium On Immigration!

Trump had a well-attended rally in Ohio:

I’m hearing 25K were at tonight’s Trump rally in Ohio!

I haven't seen a transcript of the rally, but here's some whining from the UK Independent

Donald Trump told a crowd at his first major rally since losing the election that Joe Biden’s immigration policies were leaving children “on suicide watch”.

An unprotected border is an "attractive nuisance" like an old-style refrigerator with the door still on, or an unfenced swimming pool: children can die—assuming their parents are willing to risk their children's lives.

The former president’s concern for the welfare of migrant children struck a dramatically different tone to his usual rhetoric on the subject – and during his speech in Wellington, Ohio, he resurrected one of his favourites from rallies past, an anti-immigration poem called The Snake.

Claiming that people had been begging him to read it out, Mr Trump read the poem which describes a woman taking a sick snake into her home and nursing it back to health, only for it to bite her, saying: “You knew what I was when you took me in.”

Iconic Trump. Almost no other Republican speaks truth the way this man does.

This is how every Republican should be talking about immigration, and this is what galvanized the movement in 2016. https://t.co/XkzRmMIWGp

Critics have said the poem suggests that immigrants are violent and not to be trusted.

That reminds me that in the mass murder case of Kenyan immigrant Billy Chemirmir, the Dallas News was concerned to let people know that Mr. Chemirmir was a legal immigrant: Fact check: Serial murder suspect Billy Chemirmir is not an unauthorized immigrant, ICE says, February 17, 2020.

My point: immigrants are frequently "violent and not to be trusted" and that immigration from violent, low trust societies is bad even when it's legal.

I mention this because if Trump wants to make a political comeback, and press forward with the MAGA agenda, he needs to call for an Immigration Moratorium.

No one who's been raped by a Mexican, had their job taken by an Indian H-1B, or had their grandmother murdered by a Kenyan serial killer would feel better for knowing that the person who'd harmed them had a Green Card in his pocket.

And letting those people in is much more like "The Snake" poem than illegal immigration is: