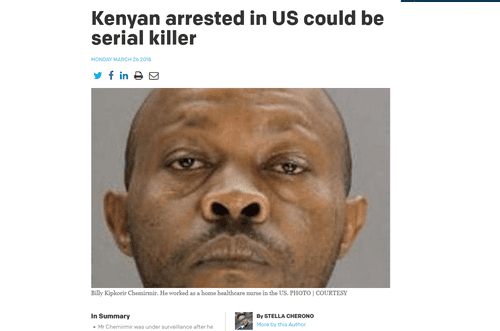 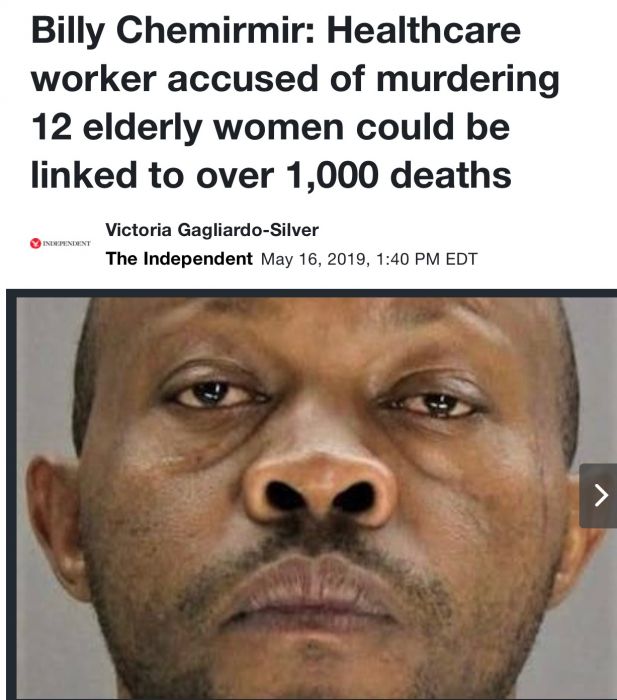 First of all, the headline above: "Kenyan arrested in US could be serial killer" [March 26, 2018] is from the website of the Daily Nation...which is located in Kenya, and has African writers and editors. Apparently, in Kenya, it's not considered racist to say that someone is a Kenyan.

In America, alleged mass murderer Billy Chemirmir is a "healthcare worker" or, of course, a "Texas Man."  or "North Texan," depending on which CBS outlet you get the story on.

According to the Independent, via Yahoo News:

A healthcare worker has been charged with the murder of 12 elderly women by smothering, and is being investigated for any potential links to 1,000 more unexplained deaths.

Billy Chemirmir, 45, of Texas is accused of murdering multiple elderly women who lived in Dallas and Collins counties with a pillow, and subsequently robbing them.

In March of 2018, Mr Chemirmir was charged with capital murder in the death of an 81-year-old woman, Lu Thi Harris, leading to his arrest.

Mr Chemirmir has also been accused of two counts of attempted capital murder for attacking two women. One of the two women, a 93 year-old who was a resident of the Parkview Elderly Assisted Living facility in Frisco, Texas, had reported the incident to police.

She described how a well-dressed man had knocked on her door, claiming to be a maintenance worker. When she responded that she did not require any work done, he forced his way inside and "knocked her from her walker to the floor", as reported by Dallas News.

Mr Chemirmir worked as a nurse in his native country of Kenya, but appears to not have been legally working in healthcare in the US. Court records indicate that Mr Chemirmir posed as an employee at the Edgemere Retirement Community in Dallas under the alias “Benjamin Koitaba”.

Authorities plan to review the unattended deaths of hundreds of elderly women in the area, including those who were previously thought to have died from natural causes to investigate any potential ties to Mr Chemirmir.[More]

Most of the victims are white, judging by their names, although one was Asian. That's not something that appears to interest the media.