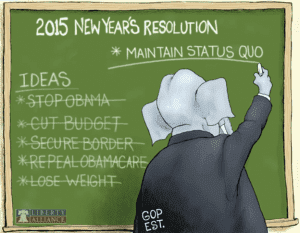 As I noted in Boehner Vote: 25 Brave MEN (And 6 Freshmen Rats) it has been primarily Southerners who have emerged as defenders of the American Nation.

This has apparently put those Southern Congresscritters (the majority, alas) who acquiesced in funding Obama’s Amnesty coup d’etat in an unpleasant situation and they are scrambling to lie their way out of it.

After her vote for the CRomnibus, Roby was in full damage control-mode. In a column on the Yellowhammer Multimedia politics site Roby claimed that “The truth is the Appropriations plan does not ‘fund’ amnesty…

This is as bold a lie as a politician has told in a long time.

As anyone who read the bill would know, on pages 128 and 129 (Rules Committee version) the bill provides the Department of Justice (DOJ) funds for the “Administrative review and appeals (including transfer of funds) “For expenses necessary for the administration of pardon and clemency petitions and immigration-related activities, $351,072,000, of which $4,000,000 shall be derived by transfer from the Executive Office for Immigration Review fees deposited in the ‘Immigration Examinations Fee’ account.”

… Not only that, but on page 909 the bill grants millions of dollars to the Obama administration to educate and process the amnesty applications of the thousands of “UACs” or unaccompanied minor children that have flooded into the U.S. since Obama’s amnesty plan became common knowledge on the streets of Central America.

This provoked an arrogant but incompetent response from one of Congresscritter Roby’s staff minions which Conservative HQ destroys today:

On Friday we received the following missive from someone on Rep. Roby’s staff named Todd Stacy. Mr. Stacy wrote, “I don't know who wrote this, but it is rubbish. Roby's bill came directly from language crafted by Senator Sessions. The same language is in the Aderholt bill. It was also part of an amendment filed last year by Rep. Mulvaney.”

Let’s see, Rep. Roby’s spokesman says her bill does PART of what Rep. Aderholt’s bill does or PART of what Senator Sessions has advocated, so by her spokesman’s own admission the Roby bill is not a comprehensive solution to defunding amnesty.

The point of our article…was exactly that — Obama’s unconstitutional “executive amnesty” isn’t just being implemented through the Department of Homeland Security (DHS), but by many other agencies, including the examples we cited of the Department of Justice and Department of Education.

So to stop amnesty you have to stop all of those programs, not just the future activities of the Department of Homeland Security. That’s why we like and recommend the approach proposed by Rep. Robert Aderholt (AL-4).

Roby’s bill, which she cribbed from one small part of the comprehensive approach needed to stop Obama, will not prohibit the President from letting millions of illegal immigrants stay here to demand taxpayer-funded services and compete for jobs with native born Americans and legal immigrants.

So, what’s “rubbish” is the notion that Roby’s bill will accomplish its stated goal of stopping amnesty, because it defunds only one part, and perhaps not even the most important part, of Obama’s government-wide scheme to subvert the Constitution and unilaterally grant amnesty to millions of illegal aliens.

Alabama Representative Bob Aderholt’s bill, HR 191, is a much better approach and it actually does what Martha Roby claims she wants to do; it stops Obama’s unconstitutional amnesty and digs it out by the roots. We urge you to call your Representative and Senators (the Capitol Switchboard is 1-866-220-0044) and ask them to support the Aderholt bill, HR 191.

Daniel Horowitz posted an incisive (as usual) analysis of the Aderholt Bill at Conservative Review here and James Kirkpatrick discussed it for us last night in Hour of Decision—First Chance and Last Chance For GOP Congressional Leadership.

We also stand by our opinion, and it is an opinion based on working in conservative and Republican politics for over 40 years, including working on Capitol Hill and the White House, that defunding amnesty through DHS is just a smokescreen, and that the Capitol Hill Republican leadership will not actually fight to win the battle to stop Obama’s amnesty because they agree with its result.