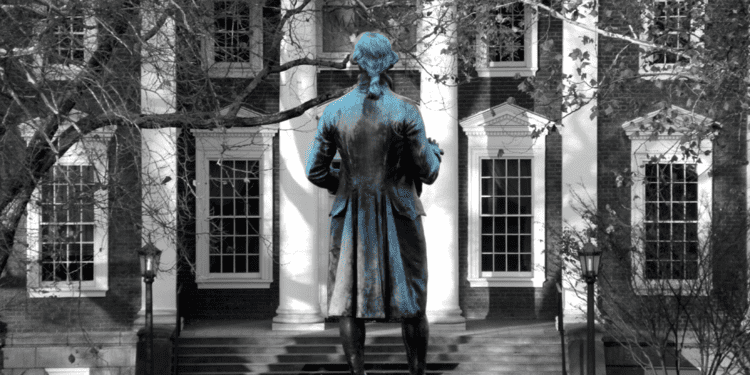 From one Virginian to another (in The Atlantic):

Fortunately for America, as Jefferson saw it, British aristocracy had never taken root here in the colonies. Most British toffs didnt have the faintest urge to depart their country estates and London clubs, their coaches-and-four, their tailors, valets, butlers, ballrooms, peruke-makers, and neck-cloth launderers for a wilderness full of painted bow-and-arrow-bearing aborigines and no desirable women, unless one were a rather twisted toff who had a thing for granola girls with honest calves and forearms and hands thick as a blacksmiths from hoeing the corn and black-eyed peas. From the very beginning of his political career, Jefferson was determined to make sure no aristocracy, European- or American-born, would ever be established here. Aristocracy literally means rule by the best, but he knew the proper word was plutocracy, rule by the rich, in this case big landowners who maintained their lordly, demigodly, hereditary rank only by passing their estates down generation after generationintactcourtesy of the law of entail and the right of primogeniture. As soon as the Revolution was won, Jefferson launched a successful campaign to abolish both. Too bad he couldnt have lived another hundred years to see just how efficient his strategy was. In America, rare is the plutocrat whose family wields power and influence beyond the second generation. One need only think of the Vanderbilts, Goulds, Astors, Carnegies, and Mellons. Where are they now? On the letterheads of charitable solicitations, at best. They dont even rise to the eminence of gossip-column boldface any longer. The rare ones have been the Bushes, who have wielded powera lot of itinto the third generation, and the Rockefellers, who have made it into the fourth by a thread, the thread being Senator Jay Rockefeller of West Virginia. But the odds are 2-to-5youll have to bet $5 to win $2that within 10 years the last, best hope of even these exceptional families next generations will be to start climbing the white cliffs of the disease-charity letterheads.

Jefferson created a radically new frame of mind. In a thousand different ways he obliterated the symbols and deferential manners that comprise aristocracys cardiovascular system. Led by Jefferson, America became a country in which every sign of aristocratic pretensions was systematically uprooted and destroyed. The round table where the Merrys [the stuffy English ambassador and his wife] suffered their intolerable humiliation? It has been recorded that Jefferson insisted on round tables for dining because they had no head and no foot, removing any trace of the aristocratic European custom of silently ranking dinner guests by how close to the head of the table they sat. That certain class does not exist here psychologically.

Jeffersons pell-mell gave America a mind-set that has never varied. In 1862, 36 years after Jeffersons death, the government began the process of settling our vast, largely uninhabited western territories. Under the terms of the Homestead Act, they gave it away by inviting people, anybody, to head out into the open country and claim any plot they likedGloriously pell-mell! First come, first served! Each plot was 160 acres, and it was yours, free! By the time of the first Oklahoma Land Rush, in 1889, it had become a literal pell-mella confused, disorderly, headlong rush. People lined up on the border of the territory and rushed out into all that free real estate at the sound of a starter gun. Europeans regarded this as more lunacy on the part of these Americans squandering a stupendous national asset in this childish way on a random mob of nobodies. They could not conceive of the possibility that this might prove to be, in fact, a remarkably stable way of settling the West, of turning settlers into homeowners with a huge stake in making the land productive or that it might result, as the British historian Paul Johnson contends, in the immense benefits of having a free market in landsomething which had never before occurred at any time, anywhere in the world. So long as you had made certain required improvements, after five years you could sell all or part of your 160 acres to other people, any other people. Its hard to be absolutely sure, but where else in the world could ordinary citizens go out and just like thathow much you want for it?buy themselves a piece of land?

The notion that cheap land and high wages are the essence of the American Advantage goes back even farther than Jefferson, to at least Ben Franklin's 1751 essay "Observations Concerning the Increase of Mankind.