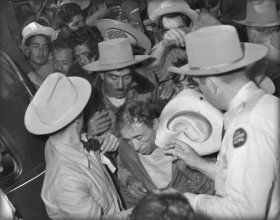 To Do Operation Wetback, Eisenhower Didn't Need To Pass Any Laws. Neither Would Trump

Below, Patrick Cleburne posted on the history of Operation Wetback, saying that Eisenhower had the political will do actually deport people. That gives me an opportunity to recycle something I first noted in 2006, when I had the opportunity to speak to former Border Patrolman Bob Park, who as a young Border Patrolman took part in Operation Wetback, in 1954. He pointed out that Eisenhower didn't have to pass any laws.

In November, when Obama did his "Executive Action" on immigration, Daniel Horowitz pointed out that Eisenhower's equivalent executive action "was to deport 80,000 illegal immigrants." Many more self-deported, because they could see that the Government was taking this seriously.

Well,  Donald Trump, if he was in charge, could do the same thing. He certainly doesn't lack political will.