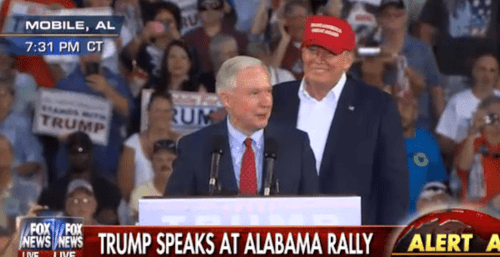 In Alabama, Trump Shoutout to America’s Senator Jeff Sessions Is a Crowd Pleaser

Donald Trump welcomed Senator Sessions to the Mobile, Alabama, podium during Friday’s campaign rally, where the crowd responded with pleasure at the appearance of the hometown hero, who ran unopposed during his last election. Sessions spoke a few words of greeting from Mobile and also appreciation for Trump’s embrace of the vital immigration enforcement issue.

TRUMP: We have a great politician here. We have a man here who really helped me, and he’s the one person I sought his counsel because he’s been spot on, he’s so highly respected. Has anybody ever heard of Senator Jeff Sessions?

Jeff, come up, where’s Jeff? Get over here, Jeff. Look at him, he’s like 20 years old. Unbelievable guy. Say hello.

SESSIONS: Donald, welcome to my hometown, Mobile, Alabama. The American people, these people, want somebody in the Presidency who stands up for them, defends their interest, and the laws and traditions of this country. We welcome you here. Thank you for the work that you’ve put into the immigration issue. I’m really impressed with your plan. I know it will make a difference. And this crowd shows a lot of people agree with that. Congratulations. Welcome, and God bless.

TRUMP: He was so great, such a help.

In fact, Senator Sessions did help Trump create his position paper on immigration. It is a reassuring sign of Trump’s seriousness about the subject that he consulted such an outstanding expert and leader. Trump’s website includes the paper: Trump Immigration Reform.