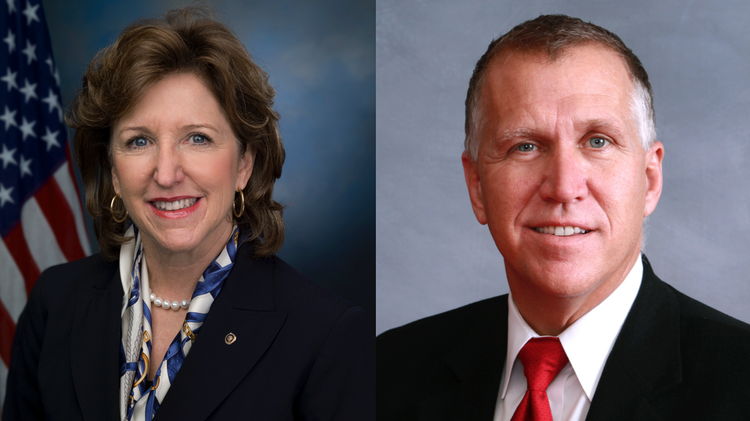 Tillis Closing The Gap in North Carolina, Moves Above 50% of White Vote Despite Continued Stupidity

The Stupid Party's hapless candidate in North Carolina, Thom Tillis, is inching closing to Democratic frontrunner Senator Kay Hagan.  A new poll shows he is now only trailing by 2 points — still an incredible unforced error in a state that voted overwhelmingly for Mitt Romney.  However, at least he's within the margin of error.

Hagan, a Democrat, is ahead of Tillis 47 percent to 45 percent — her narrowest lead in weeks. Libertarian Sean Haugh received 4 percent in the survey by USA TODAY/Suffolk University, while 3 percent of those polled said they were undecided.

Tillis's relative success is being driven by the GOP base in the mostly white western regions of the state coming home to support him.

Tillis' favorable rating has increased from 24% to 38%, indicating a firming up of support in areas you may expect. Comparing Tillis' favorability by area, we observed a huge turnaround in popularity in the west/mountain region, from a 25% favorability rating to 52%.

He is also now over the 50% margin in his white support.  Paleologos notes,

Among white voters, Tillis led Hagan by 13 points, 51% to 38%. Among non-white voters, Hagan led 68% to 25%. That puts enormous pressure on the minority districts in the state to turn out for Hagan. If 23% to 25% of likely voters are African- American, Hagan will win easily, given the nearly 3-1 edge that she holds among that demographic. However, if minority intensity and participation falls into the mid-to-low teens, Tillis will ride his commanding lead among white voters right into the Senate.

Of course, the reverse of this also holds true.  Tillis needs to turn out his base, the white vote, in order to win the election.

What's driving his support?  Paleologos believes that the increased importance of the terrorism issue, especially the rise of the Islamic State, is giving more credibility to Tillis's repeated charges that Hagen is soft on terrorism.  However, as the Politico article noted,

The same poll also found that Tillis’ latest line of attack — hitting Hagan for missing Armed Service Committee meetings — might not be that effective. Asked if the ad from Tillis’ campaign on the issue would make them more or less likely to vote for the incumbent, 34 percent of respondents said less likely, but 53 percent said it would make no difference.

The explanation may lie in something more prosaic.  Paleologos writes that Tillis is being hammered by Democratic attack ads that are

[C]riticizing Tillis and highlighting $500 million dollars of cuts made to education while owners of private jets and yachts were given tax breaks. The ads — sponsored by the Democratic Senatorial Campaign Committee, the Senate Majority PAC and the National Education Association — are keeping Hagan in the lead.

However, the ads are also raising Tillis's name recognition, which is another one of the main problems he has faced.  With the Islamic State and Ebola in the news, issues that are traditionally friendly to the Republicans are becoming more prominent nationally, allowing Tillis to consolidate his support in an area of the state that traditionally votes Republican.  Unfortunately for him, Tillis is simply moving up from being a completely failed candidate to one who is getting about the same amount of support as any Republican.

That's not good enough to win though.  Tillis needs to actually turn out his base to win this election.  But he can only do that if he campaigns hard on immigration, not on why America desperately needs to invade Iraq again.  Unfortunately, Republicans would rather stick to the usual program and lose than act like populists and National Conservatives and win.

Tillis's family is already preparing for their own future win or lose.  In one of those stories that I couldn't invent because no one would believe it, Tillis's son Ryan is already starting his own career in politics — as a political consultant.  [#ncsen: Tillis son jumps into political consulting, by Brant Clifton, The Daily Haymaker, October 8, 2014]

The apple doesn't fall far from the tree.  It's the perfect Beltway Right family.