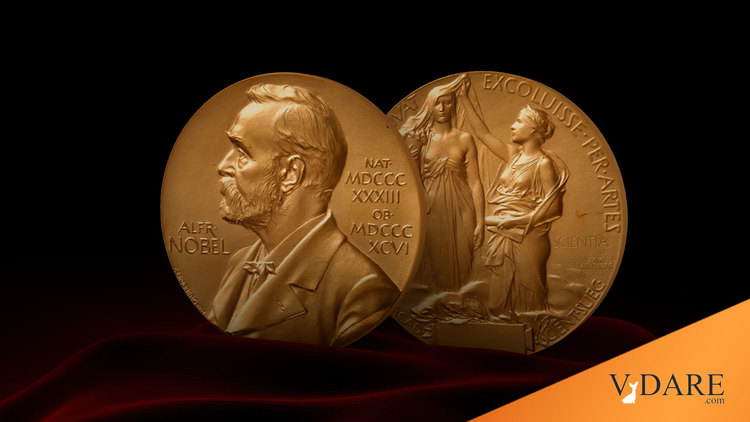 When my paternal grandfather was a teenager in the late 19th Century, he was a delivery boy for a lens factory. One of his regular stops was the laboratory of physicist Wilhelm Röntgen, who was using glass from my grandfather’s employer in inventing what we know today as the X-ray machine.

At the time, Röntgen’s discovery of X-rays seemed like a big deal and a boon to humanity. Thus, when the Nobel Prizes started up in 1901, Röntgen was chosen, out of all the living physicists in the world, to receive the first Nobel in physics.

Thus, from the Tory Telegraph of London:

As the Nobel laureates for peace, literature, economics, medicine, physics and chemistry are named for 2014, The Telegraph investigates the history of the awards’ gender and geographical bias

Just five per cent of almost 900 Nobel Prizes distributed to the most brilliant minds in peace, literature, science and economics over the past century have been awarded to women.

Of 867 prestigious awards distributed since 1901, just 46 have been awarded to women, starting with Marie Curie who won the prize for physics alongside her husband Pierre in 1903 and again for chemistry in 1911.

Since then, 15 women have also been awarded the Nobel prize for scientific pursuits – compared to more than 500 men. A dozen have received the award for literature, 14 for peace and one for economics.

Geographical analysis by the Telegraph has also revealed that western countries have received a disproportionately high number of awards throughout the Nobel’s history. …

The breakdown of male and female winners of the award in each discipline shows women in peace and literature are more likely to win the award than those in scientific pursuits.

Given the huge political and social power held by western men over the last century, low representation for women may be expected. However the findings in certain disciplines are striking.

For Physics, less than one per cent of the award winners have been women. Similarly, just under a dozen of the 200 prizes handed out for medicine have gone to female healthworkers.