Three Americans Killed in Indiana in Another Preventable Crime 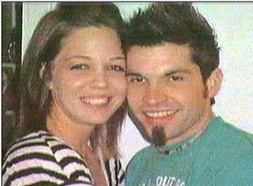 There's more tragic carnage to report, due to the nation's open borders: a drunk-driving illegal alien living in Indiana, Mario Cardena, killed three Americans (and himself) in a horrific crash that left three twisted vehicles indicating the force of the impact.

MERRILLVILLE — Friends and family mourned the death of a prominent attorney, a young couple soon to be married and a Mexican immigrant who had long struggled with a drinking problem — all four of them killed in three-car collision Wednesday near the border of Merrillville and Winfield.

As Hough and Weiss pulled into the intersection of Randolph and 101st Avenue, Mario Cadena sped west, past a stop sign and into Hough’s Ford Explorer, driving the truck into Weiss’ Mustang. No one emerged alive from the twisted wreckage.

Merrillville police declined comment on the crash but said high speed was a factor. The Lake County coroner will not have results of blood toxicology reports for several days. Police sources say they believe Cadena had been drinking, and a beer bottle was on the front seat of his ruined Jeep Cherokee at the police impound yard. [Speed, alcohol thought to be factors in fatal Merrillville crash, By Andy Grimm, Merrillville Post-Tribune, May 1, 2008]

Stephen Hough, 26, and Amy Bartelmey, 25, (shown above) had planned to be married after he graduated from Purdue with a degree in public relations. She had a two-year-old son from a previous relationship.

Another victim in a separate vehicle was a well known local attorney Garry Weiss, 53, who is survived by his wife Cindy and two teenage children: Speed, Alcohol Factors In Collision That Killed Four (WMAG-TV Chicago, May 1, 2008).

"He was the love of my life. Everybody loves him. He just ... he was perfect. No, not always perfect, but a wonderful husband, wonderful father, wonderful lawyer, wonderful friend, son, brother ... there's not enough to be said about him," his wife, Cindy Weiss, said. "I love him and I miss him."

The killer is also dead, so there will be no trial and public examination of his previous arrests; he is another criminal foreigner who should have been punished at the time of earlier crimes and then deported, a basic execution of the law that would have saved his own and three other lives. He had previously been arrested for drunk driving, so this crime was not unforseeable: Driver in fatality had long history [Merrillville Post-Tribune, May 3, 2008].

Cadena was charged with driving without ever having been issued a license and driving while intoxicated after a 2001 arrest by Lake County Sheriff's police.

A plea deal with prosecutors reduced the drunken driving charge to reckless driving, and Cadena was given a suspended jail sentence of 180 days and paid $480 in fees and fines.

In October 2003, Cadena was pulled over by State Police for unsafe lane movement and driving while intoxicated with a blood-alcohol level above 0.15 percent — nearly double the 0.08 percent required for a drunken driving charge. Cadena again reached a plea deal with prosecutors and received a suspended sentence of one year by Judge Julie Cantrell.

Cantrell also saw Cadena in court in June 2006, when he was charged with driving 77 miles per hour in a 55-mile-per hour zone, failure to register his vehicle and driving without a license.

It's a story that is painfully similar to many others. Had Judge Cantrell and other local officials of the justice system not been unforgivably weak in dealing with an obviously dangerous illegal alien, this terrible crime could have been prevented.