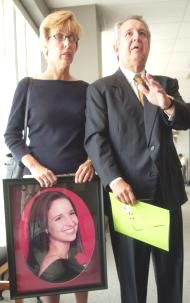 The 2004 murder of Jenny Garcia in her own bedroom in her parents' Austin home was one of the most terrible crimes imaginable. The 18-year-old college freshman was discoved by her two younger sisters tied up and naked on her bed with a butcher knife in her chest. Jenny had been brutally killed by a Mexican illegal alien who was acquainted with her from their both working at the same restaurant.

Hayden and her husband Humberto Garcia, who has since died, sued the City of Austin in 2005, alleging it had a policy of not reporting undocumented immigrants, which contributed to their daughter's death.The city says it has no policy that prevents employees, including police, from calling immigration officials.

A federal judge dismissed the lawsuit, ruling that the slain girl's parents did not show a link between the alleged policy and her death.

Jenny Garcia Hayden, 18, was killed in her family's North Austin home by David Diaz Morales, who pleaded guilty and is serving a life sentence. Her parents said that Austin police should have turned Diaz over to federal authorities for deportation when they suspected him of child molestation two years earlier. Diaz wasn't arrested in that case; the district attorney's office said there was insufficient evidence to charge him. [Mother of slain girl supports immigration agents in jail, By Juan Castillo, Austin American-Statesman, May 4, 2008]

One of the most shocking things about this case is how Austin authorities apparently protected a child molester from prosecution because of his immigration status. Austin has been a sanctuary city for illegal alien criminals, although there may be change on that front.

Now Jenny's mother is speaking out in support of the proposed policy of having federal agents in Travis County jails to find and deport foreign criminals upon release. What could be controversial about that idea?

Diaz "should have never been in our country," said Ann Hayden, who now lives in El Paso. She said her husband died of a heart attack last Thanksgiving during a visit to Austin, when he visited his daughter's grave. Her murder caused his death, too, Hayden said.

"Our entire family was destroyed. He suffered the most," Hayden said during an emotional telephone interview. "He would tell anyone, 'All I want is to be with my daughter.'"