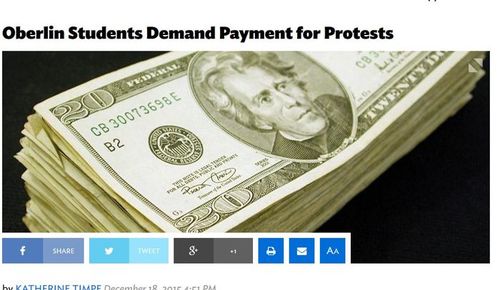 And maybe it should feature a picture of black Oberlin "protesters" instead of Andrew Jackson.

I mean, this isn't like a black robber, murderer, or rapist, where the race is irrelevant, this is the Oberlin College Black Student Union doing asking for money for black students to do "Black Lives Matter" protests.

And the first words of the article are  "They also demand “segregated black-only ‘safe spaces.’”   So maybe mentioning that they're black in the headline would be good. Katherine Timpf writes

The 14-page (!) document opens with this nice buzzword salad:
Oberlin College and Conservatory is an unethical institution. From capitalizing on massive labor exploitation across campus, to the Conservatory of Music treating Black and other students of color as less than through its everyday running, Oberlin College unapologetically acts as [sic] unethical institution, antithetical to its historical vision.

“This institution functions on the premises of imperialism, white supremacy, capitalism, ableism, and a cissexist heteropatriarchy,” it continues.

Timpf is right that it's pretty awful. Here's what she says about the black students' now fairly standard demand for their own space, that unusually uses the word "segregated"—although black student unions, black student housing, and black fraternities have been segregated for years, because they're different from similar white institutions:

Other demands on the list include one for the “establishment of special, segregated black-only ‘safe spaces’ across campus” and a “40 percent increase in the number of black students in the school’s jazz department by 2022.”

Now, the document does state that the items on the list “are not polite requests, but concrete and unmalleable demands,” but it seems like some of them might be kind of tough to accomplish. First of all, creating “segregated” spaces for black students might be kind of hard considering that, you know, segregation ended and the fact that it ever existed in the first place is pretty damn near universally seen as a humiliatingly racist blemish on the fabric of our country’s history.

Yes, I believe that's what's taught in schools. (Timpf is a millennial.) But it wasn't William F. Buckley's view in 1957 when segregation was going on.