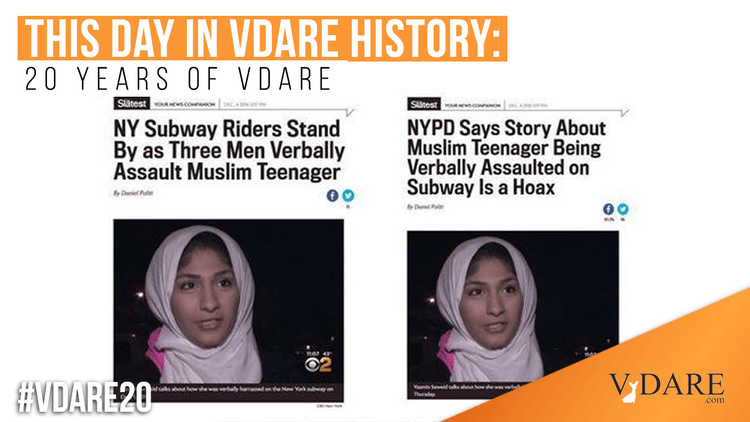 This Day In VDARE.com History, 2016: Dept. of Oops: Another Muslim Hate Hoax

Originally published here on VDARE.com on this day in 2016.

Three white men who were apparently intoxicated repeatedly yelled anti-Islam insults at a Muslim student in the New York City subway and no one did anything. The men, who yelled “Donald Trump!” several times and even tried to pull off the terrified 18-year-old’s hijab, also accused her of being a terrorist. This all took place at around 10 p.m. on Thursday night on the 6 train as Yasmin Seweid was returning home from Baruch College.

“I heard them talk, but I had my headphones in, I wasn’t really listening, I had a long day. And they came closer and I distinctly heard them saying, ‘Donald Trump,’ ” she told the local CBS affiliate. Although there have been a spate of racist incidents across the United States since the election, this one was particularly shocking because it happened in New York and it seem no one tried to step in to help Seweid.

This marks the latest in a growing wave of these types of incidents in New York and across the country (Slate is compiling a running list). From Nov. 8 through Nov. 27, New York law enforcement officials said there were 34 reported incidents, compared with 13 in the same period last year.

Update, Dec. 14, 2016: Nearly two weeks after what appeared to be a horrifying incident on the New York City subway, the NYPD announced that the apparent hate crime never happened, and Muslim teenager Yasmin Seweid made up the story that she was harassed by three drunk white men on the subway who shouted Trump slogans and tried to pull off her hijab. The 18-year-old has been charged with filing a false report and obstructing governmental administration.

From the NY Daily News today:

The police source said criminally charging her was appropriate.

“This isn’t something we normally like to do but she had numerous opportunities to admit nothing happened and she kept sticking by her story,” the source said.

“We dedicated a lot of resources to this — and don’t get me wrong, this is what we do — but we had guys going back and forth, looking for video and witnesses. And we couldn’t find anything.

“Nothing happened — and there was no victim.”

It wasn’t immediately clear what Seweid hoped to gain by lying to police. 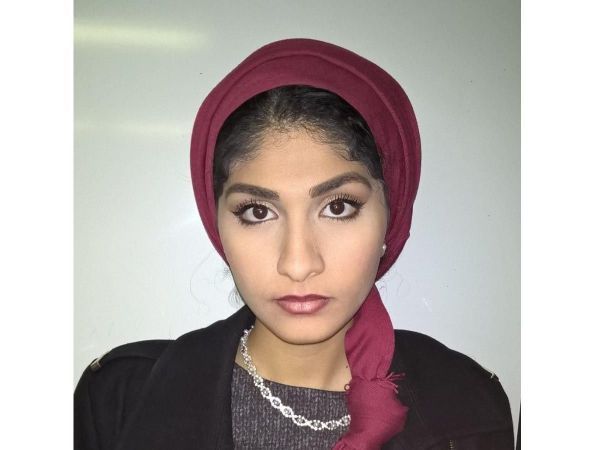 Since the concept of “hate hoax” still doesn’t exist in the minds of the mainstream media, the odds of getting in trouble for lying are small as long as you are crafty like Jackie Coakley and Don’t Talk to the Cops.

Talk to the media, but don’t get the law involved.

This massively publicized hoax wasn’t Fake News because you are hateful.