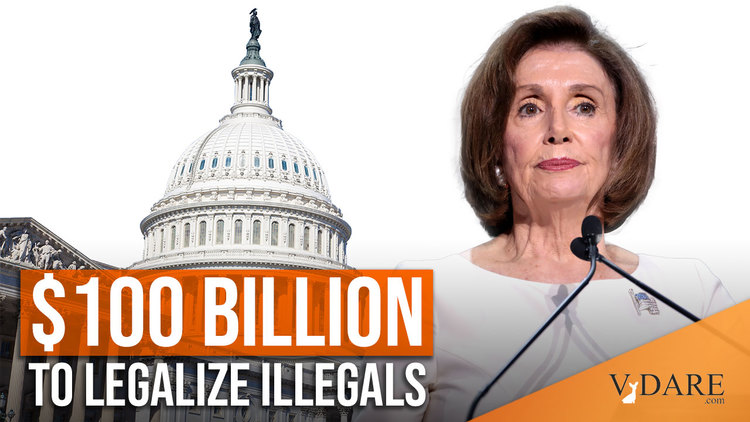 The Latest On The Budget Amnesty Bill

The Democrats’ best chance to pass amnesty overcame another hurdle this week. The House passed a Senate-approved blueprint for a $3.5 trillion budget bill on Tuesday. It’s not an actual bill, but a framework to craft legislation. The resolution’s passage came with concessions to “moderate” Democrats [House Passes $3.5 Trillion Budget Blueprint, Sets Deadline for Infrastructure Bill, by Kristina Peterson and Andrew Duehren, Wall Street Journal, August 24, 2021].

This does reduce the budget bill’s chances for passage by a slight margin. Moderates are less inclined to vote for it if their preferred legislation—the infrastructure bill—can pass without a vote on the bill containing amnesty. Moderates are hesitant to support the budget bill, but not because it contains amnesty. They think it costs way too much money and will result in a tax hike for their constituents. They fear they may lose their seats in 2022 if they vote for it [House Passes $3.5 Trillion Budget Blueprint, Sets Deadline for Infrastructure Bill, by Kristina Peterson and Andrew Duehren, Wall Street Journal, August 24, 2021].

The amnesty provisions are still not clear yet. As VDARE.com reported earlier this month, the bill will allot over $100 billion to legalizing illegals and there could be as many as 10 million illegal aliens eligible for the amnesty. It’s expected to include “Dreamers”—illegal aliens who arrived as minors—migrants covered by Temporary Protected Status, and illegal “essential workers.”

Even though the blueprint was approved by a narrow margin and without any Republican support, that still doesn’t guarantee passage. The bill aims to go through the reconciliation process. Through this procedure, a bill can pass with a simple majority if it is found to pertain to the budget. This determination is made by the Senate Parliamentarian. For the bill to pass, every Democrat in the House and the Senate has to vote for it. If four Democrats vote against it in the House or if one Democrat votes against it in the Senate, it dies. Even if every House Democrat votes for it, it could still be rejected by the parliamentarian. According to sources, Republicans on Capitol Hill place their hope in stopping the bill.

But there’s still a chance moderate Democrats could kill it on their own. The border crisis shows no sign of abating and immigration will play a strong role in the 2022 election. Many of these Democrats will face constituents angry over their lawmakers selling them out in favor of illegal aliens. Smart ones who want to stay office would vote against the bill. A lot can change in the political sphere over the next few weeks.

The budget amnesty bill moves on, but its latest progress may doom it in the end. Moderates don’t need to worry about voting for it to get the bill they want.