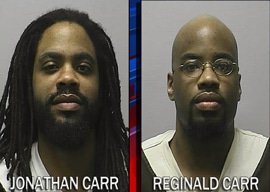 This week, as last week, I begin my Radio Derb podcast with a capital punishment case.  I promise not to make this a regular feature, but this case is so egregious I'm putting it up front.

Here's what happened. Five young professionals, three men and two women, all white and in their 20s, were gathered in a house in a middle-class neighborhood of Wichita, Kansas, ten days before Christmas of the year 2000. The young men were named Jason Befort, Bradley Heyka and Aaron Sander. The women were named Heather Muller and H.G.; the reasons for the second lady's anonymity will become clear. Jason Befort and H.G. were sweethearts.

At 11 in the evening, two young black men, Reginald Carr, recently released from prison, and his younger brother Jonathan, who also had a criminal record, forced their way into the house. They committed numerous sexual atrocities against the five inhabitants: if you want the details, and have a strong stomach, you can read them at the internet crime library, www.crimelibrary.com, heading "The Wichita Horror."

The Carr brothers then drove the five victims, naked and bound, to a snow-covered soccer field, where they forced them to kneel and shot them all in their heads, then ran over them with a truck. The anonymous woman H.G. was saved from death by a metal hair clip which deflected the bullet. She also survived being run over. When the Carrs had left the scene she ran naked through the snow for a mile to get help. The Carr brothers meanwhile had gone back to the house, where they killed H.G.'s pet schnauzer, Nikki, by beating him with a golf club, then stabbing him with an ice pick.

In November 2002, nearly twelve years ago, the Carr brothers were found guilty on multiple counts of capital murder, aggravated kidnapping, aggravated robbery, rape, and animal cruelty. Then at a penalty hearing, the jury recommended the death penalty. The judge agreed, and sentenced the Carr brothers to death.

Throughout reporting on the crime and the trials, political correctness protocols were strictly observed. Despite the exceptionally ghastly nature of the crime, and the miraculous survival of H.G. — which you'd think would be highly newsworthy in itself — there was no national coverage by major media. None of the big broadsheet newspapers or network TV stations — nor, so far as I can ascertain, any of the national cable TV channels — carried stories.

The county D.A. made a point of publicly declaring that there was no racial motive to the crime, on the grounds that the Carr brothers are not known to have used any racial insults. I note the following:

Once the Carr brothers had been convicted and sentenced, the appeals circus began. It ground on for eleven and a half years while the Carr brothers worked out, played cribbage, and watched TV at the El Dorado Correctional Facility. If Kansas Department of Corrections operate along the same lines as those of New York State and Baltimore, they may also have had a little recreational fun impregnating gullible female corrections officers, I don't know.

July 25th the seven judges of the Kansas Supreme Court overturned the Carr brothers' death sentences on a technicality — a technicality that had apparently escaped everyone's attention for twelve years. The technicality was that the district court judge, since deceased, who presided over the brothers' trial should have held separate sentencing proceedings for the two men. [Jonathan and Reginald Carr death sentences overturned, By Amy Renee Leiker, The Wichita Eagle, July 25, 2014]

If you don't think that's a powerful enough reason to allow the Carr brothers to continue on Earth for another twelve years, jeering at their victims' families, at least one of the seven appeals court judges agrees with you. Judge Nancy Moritz said that separate hearings would not have influenced the outcome of the case because witness testimony, the "unusually egregious facts" of the case and evidence against the Carr brothers was so strong. So I guess we can take comfort in the fact that not every judge in Kansas is clinically insane.

And those political correctness protocols are still in force. I went to Google News and put "wichita" and "carr" into the search box. I got a ton of stories about the appeals court decision. Here are the outlets carrying the stories: Kansas.com (that's a local news website), KMUW (that's a Wichita radio station); Topeka Capital Journal; Fairfield Citizen (that's Fairfield, Connecticut — but this is an outlier); KAKE (another local station); fox4kc.com (that's a Kansas City station); Emporia Gazette out of Emporia, Kansas; Huffington Post — hey; Daily Mail Online (that's a London newspaper); FrontPage magazine, a web outlet of the hate-filled, knuckle-dragging Extreme Right; KSN-TV (another Wichita station); …

Well, you get the idea. I scrolled forward for six pages hoping that the New York Times, the Washington Post, ABC News, or some other big news outlet might be carrying a story, but … [Crickets] …