Congresswoman Michele Bachmann Visits Border, Sees The Chaos, And Comes Back On Fire 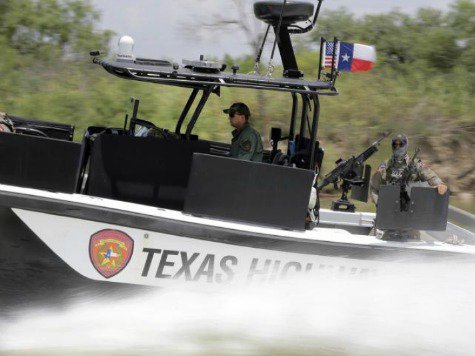 Congresswoman Michele Bachmann [R-Minnesota] and Congressman Steve King [R-Iowa] made multiple stops along the Texas/Mexico border last weekend to see for themselves the administration-engineered immigration chaos. In a Tuesday-evening (July 29, 2014) "tele-townhall" conference call sponsored by NumbersUSA, Bachmann spoke with tremendous passion about what she and King had observed: "Virtually nobody is being stopped from entering. Our Border Patrol officers have simply become people-processors. ... This truly is a war against the American people."

Bachmann described watching a pregnant woman being ferried across from the Mexican side on a raft and, upon arrival in Texas, approaching Border Patrol agents and saying "Are you Border Patrol? I want to surrender to you, and I'm asking for amnesty."

You can read about Bachmann's experiences in a press release at her congressional website. There's a more-detailed story posted at Breitbart. (The Breitbart article includes two videos taken by Bachmann using her iPhone, but I don't think they add much, and both are preceded by Breitbart-inserted commercials.)

And Bachmann subsequently wrote about her and Congressman King's weekend expedition at Townhall.com (What I Saw at the U.S.-Mexico Border, July 31, 2014). In this column, she reported that "[O]fficials told us that 80 percent of the people entering the country illegally are not women and children—they are males over the age of 14."

You can hear a replay of the entire 63-minute tele-townhall at this link. The congresswoman launches into a monologue at about 1:30, speaking until about 11:00. Then she's joined by Rosemary Jenks, the immigration-law-expert lawyer who leads NumbersUSA's lobbying and educational-outreach operations on Capitol Hill. (You can jump into the recording at any point.)

Bachmann answers questions from the listening audience, and she and Jenks discuss the political situation, repeatedly stressing the need for a melt-the-phone-lines-down assault by the grassroots on our feckless Congress.

Bachmann also suggests a few policy ideas that I'd not heard before, including "on-the-spot adjudication and deportation of illegal foreign nationals" and "a 100-percent tax on remittances," upping the ante on something VDARE.com's Brenda Walker had first suggested a decade ago.

If, after listening to the congresswoman's account of her border observations and/or reading the various written versions, you'd like to briefly thank her for standing up on this, you can phone her Capitol Hill office at 202-225-2331 or her district office in north-suburban Minneapolis/St. Paul at 763-323-8922.