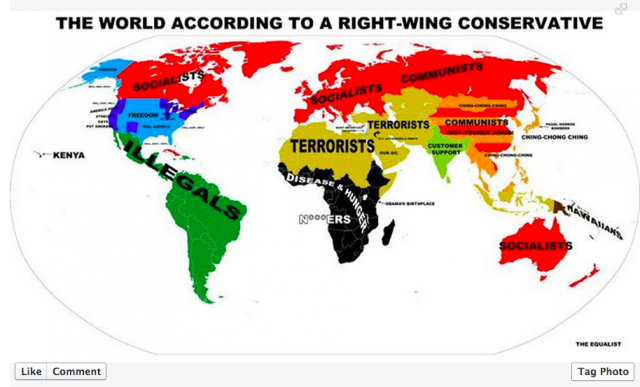 The WEEKLY STANDARD, The Democrat, and The "N-Word"

Daniel Halper on the Weekly Standard has an attack on a Democrat who "liked" something on Facebook: Which features the offensive N-word and "Ching-Chong Ching" to refer, it would appear, to Asians.[More]

The graphic has some funny bits (Hawaii is marked as "Kenya", the Indian Subcontinent is labelled "customer support") and like all such joke maps, has elements of truth in it. (Craig Ferguson frequently puts maps like this up on the Late Late Show.)

But it's stupid to accuse Erin Bilbray of racism—rather, she's, or the map's designer is, falsely accusing Republicans of that, like the time President Obama told a direct lie in a speech to Congress, causing Congressman Joe Wilson to shout "You lie!"

"Fair or not," of course, means unfair. This is what liberals think of conservatives. But the Weekly Standard's neoconservative sanctimoniousness on race means that all he sees is someone using the "Deplorable Word", and doesn't even realize that the target is white conservatives,

If you want to see something that offends actual conservatives on Bilbray's Facebook page, it's this:

According to the American Action Network, legitimate immigration reform could create almost 26,000 jobs in #Nevada - 16,000 in #NV03 alone.

No, it doesn't. It's not just me who feels that.

I wonder what the Weekly Standard thinks about that? We don't know, because Bill Kristol is urging the GOP to keep very quiet on immigration—until after the election. [Memo to House GOP, February 3, 2014]